The public needs more awareness of the limitations of automated vehicles and their responsibilities at the wheel, warns AXA technical director David Williams

Insurers and car manufacturers need to be concerned by the way “driverless” cars are marketed, according AXA technical director and chair of the Automated Driving Insurer Group David Williams.

Williams said more public understanding is needed on the differences between levels of automation and their responsibilities behind the wheel,. 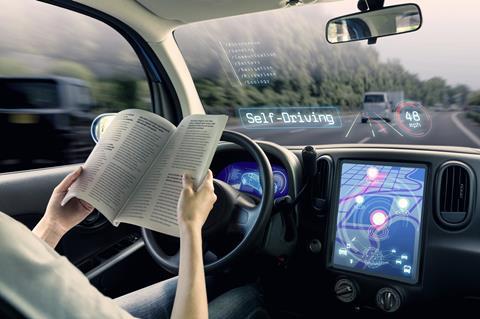 At the ABI’s “Changing Gear – adapting to autonomous vehicles” conference on Monday, Williams warned that confusing marketing of advanced driver assistance systems (ADAS) and autonomous vehicles could mislead the public and lead to an increase in claims from accidents involving cars that the they believe are driverless.

Accident research firm Thatcham Research has set out criteria to tell whether a vehicle is truly autonomous, but Williams believes it is important that the public are aware of the limitations of vehicles that may have been marketed as such.

A level 3 vehicle can navigate some stretches of road by itself, allowing the driver to completely disengage. However, it still needs to pass control back to the driver in some situations. A level 3 driver still has the responsibility to avert an accident where the car is unable.

For example, the Audi A8 has a ten second window for the driver to takeover. This handover, Williams says, can cause problems, with drivers unaware of their responsibilities or the limitations of the car.

In 2016 a driver in the US died when his Tesla’s sensor failed to identify the side of a tractor trailer crossing a highway.

Footage of people distracted in autopilot mode has surfaced on YouTube. One man filmed himself eating a burger with both hands while the car drove down a dangerous winding canyon road. Others have been filmed playing patty cake and board games, reading books, or even sleeping.

A level 4 vehicle is the next step up. It can take control in a situation where a human driver may be unwilling or unable to intervene. Car manufacturers Land Rover, Jaguar and Ford have chosen to skip developing level 3 vehicles and are aiming to produce level 4s. Williams speculated that this is probably due to liability concerns.

Williams suggested that misleading marketing may lead to accidents, saying: “What I worry about is the marketing which gives people the impression that if they have a level 2.5 or level 3 vehicle they can forget about driving. Also from the tests we have done on handover, I worry about people’s ability to take control.”

Williams gave the example of testing one vehicle which required a driver to take the wheel as soon as it encountered a roadworks sign. At this point, Williams said, “all bets are off”. A driver must be ready to take control.

“We want safer vehicles, they generally will be safer, but it’s not until you get to level 4 that the vehicle –  if it decides it cannot cope and you do not want to take control or are not available to take control –can get itself to safe harbour.”

Insurers, Williams suggested, need to emphasise that if people are using level 3 vehicles then they cannot fully disengage. He placed the onus on manufacturers to make sure that they train brokers and look very carefully at how level 3 vehicles are marketed to the public.