FCA steps up oversight of CMCs

As of April 2019 all claims management companies (CMCs) will have to be authorised by the FCA to continue operating.

It is hoped the move by the regulator to increase oversight of CMCs will help to rein in some of the sector’s more unscrupulous practices.

According to the FCA, from April CMCs will have to meet a set of minimum standards and those that are not authorised will have to cease handling claims.

“The new regime aims to drive up standards in a sector whose reputation has been tarnished by some companies engaging in high-pressure selling and by failing to provide clear information on the fees they charge,” said Jonathan Davidson, director of supervision, retail and authorisations at the FCA, in a statement.

“The new rules will ensure firms are transparent about their estimated fees before the customer signs on the dotted line, and notify customers of free statutory ombudsmen or compensation schemes,” he said. “It’s vital that customers have the information they need to make informed decisions. We will take action against those that break the rules.”

The proposed regulation of CMCs has been anticipated since it was announced in the 2016 Budget by the then chancellor George Osborne, who said the regime would clamp down on rogue claims farmers who inflate claims and “bombard” customers with nuisance calls.

Research by Populus on behalf of the AA last year suggests the frequency of cold calls have shown no sign of abating. The study found that 63% – the same percentage since 2016 – had received nuisance calls from CMCs over a 12-month period. 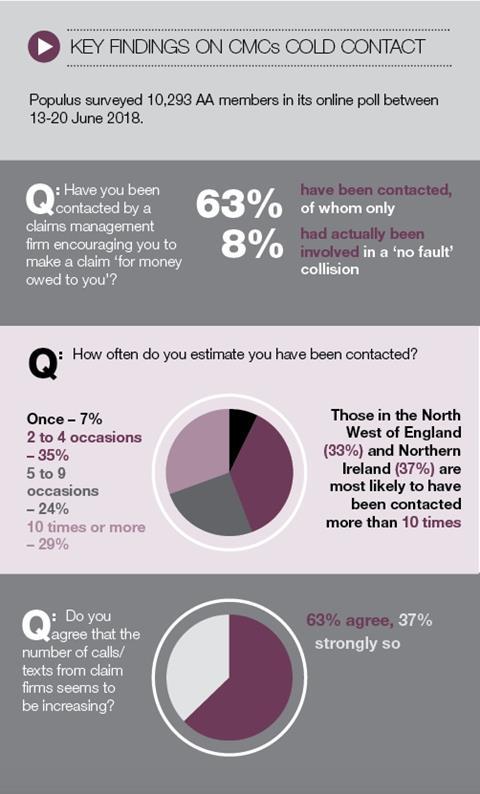