‘AIG is open for business’ 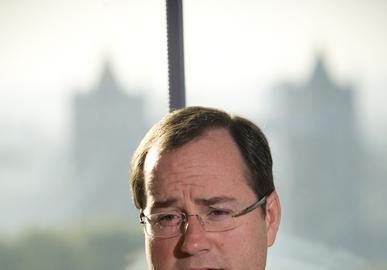 Lex Baugh, head of the London arm of the stricken US insurer, gives his first interview since the crisis broke to Ellen Bennett.

Lex Baugh is still smiling, though Lord knows how. A friendly American with a relaxed manner, he rushes out of an early meeting at 9am on Thursday to tell Insurance Times that AIG UK is safe and open for business, despite the well aired troubles of its parent company across the pond.

Overnight, that parent has had to borrow a further $37bn (£21.4bn) from the US government, on top of the $85m it pocketed in return for an effective nationalisation. In a masterpiece of understatement, Baugh admits he has had a busy morning, but takes the time to pour teas and coffees and comment on the view of the City of London that spreads out below his 12th-floor office.

Baugh has a message: AIG UK is a separately regulated and capitalised company that remains financially sound, and it is here for the long term. He denies rumours that AIG has been slashing rates to hold on to business, but admits certain rival insurers have attempted a land grab of business and staff. And while he cannot rule out a sale of AIG UK – “nobody can ever rule out a sale for any company” – he insists the company is core to its parent’s new strategy.

The nightmare began in earnest more than two weeks ago. After a series of multi-million-dollar write-downs, it had not been an easy few months – but no one expected this. On the Sunday, the newspapers were full of speculation about AIG’s future. It had been brought to the brink by its exposure to toxic sub-prime debts and its diversification into exotic financial instruments.

By the Wednesday the US government had stepped in with a bail-out package to prevent the unthinkable: the world’s largest insurer going bust. New York was frantic, but London was eerily quiet. “There was a strange calm in the morning,” remembers Baugh. “But by the middle of the day we had briefed our managers and the calls started coming in. First from brokers, then later on directly from insureds.”

The frantic activity continued for days as brokers prevaricated over whether to place new business with the insurer, or even whether to renew existing policies. The regulator got involved too: “They provided a lot of good coaching in those few days,” says Baugh, determinedly optimistic. “They didn’t block what they knew we needed to do to manage the business, and I was very appreciative of that. Sometimes it is helpful to have an objective third-party view, it was a very helpful relationship.” You can’t help but wonder what Baugh would say if the tape were not running, but he remains discreet.

Baugh says he “could not have asked for better support” from brokers. He will not provide numbers on new business over the past two weeks, but says the retention rate has been about 95%: “That’s pretty much in line with what we would expect to see in a normal period of time.”

Two days before the interview, he talked to senior brokers on a webcast, outlining AIG’s position and answering questions. “I spoke for 15 minutes, principally on the transaction [with the US government], and to make sure everyone was at the same level of knowledge,” says Baugh. “I think people left with a better understanding of AIG .”

Word has it AIG UK has slashed prices to hold on to twitchy clients. Baugh denies offering discounts. “It’s very important we maintain our position in terms of rate adequacy, and send the message to people that AIG UK today is the same company they were dealing with a month ago,” he says.

Has he been on the phone, telling his peers to back off? “No,” he says, with that diplomatic smile. Was he tempted? “I don’t think that would work. I was tempted, yes, but the only thing that is going to change the position of our competitors is what the client is asking for. If we keep the messages clear and continue to service our clients as they would expect us to, eventually the competition will realise they are pushing against a closed door and give up.”

The rivals going after AIG’s business have tried to poach staff too. Baugh insists

the employees have been loyal “to a man”, but admits the company is reviewing remuneration. He doesn’t directly say that this is to hold on to staff, but explains carefully: “We will need to look at what the incentive plan will look like. In the past, a number of people would have considered equity a significant part of their compensation. Going forward we are going to need to move to more cash alternatives.”

Have there been many departures in the past two weeks? “We have lost staff but nothing abnormal. We have a certain level of turnover that happens on a regular basis.”

It has been a heady time for Baugh. Although he has not flown back to head office in New York since the crisis broke, he has been in regular communication and says his bosses overseas are taking a close interest in client retention levels.

But he remains upbeat: “I learnt more in the last two weeks than I’ve learnt in the past five years,” he says. “It’s been high intensity, but there’s a certain buzz that comes from that.” Whether his optimism can convince a jittery market that AIG remains a viable carrier remains to be seen.