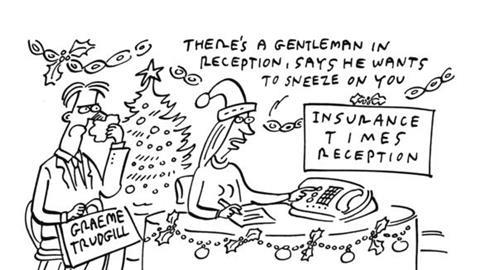 The Insider tracks the life and death of a rumour, and hears about dry martinis, wet weather and dancing girls

It’s amazing how rumours grow and mutate in this market, isn’t it? I was told last week that one insurer had stopped writing new business. That titbit buzzed around for a bit, then I was told the story again. Only this time, the insurer concerned was going bust. When the hot gossip reached my ears for a third time, the insurer was going to be the next Independent. So I decided to phone up this insurer to find out exactly what is going on. They offered a frank and robust rebuttal. I just hope they are not protesting too much ...

Poor old Vic Thompson. Imagine his concern on hearing of Carphone Warehouse boss David Ross, who got himself into hot water by using company shares to finance a personal loan. Thompson, founder of Thompson Heath & Bond (THB), suddenly realised that when he had gifted his own THB shares last January in exchange for loans from Allied Irish Bank to finance THB’s acquisition of PWS International, a rival broker, he should have disclosed it to the Stock Exchange. Of course, given that Thompson was using the shares to finance a business deal, rather than personal debt, there’s no suggestion of wrongdoing. But a sticky moment nevertheless.

I hear Guy Munnoch, Zurich UK’s chief executive, was recently propping up the bar at a London hotel with his friend Mark Winlow, who ran Zurich’s personal lines arm a few years ago. The pair were knocking back dry martinis – Munnoch apparently won’t drink anything he can’t see through. After two apiece, the pair requested another, only to be told by the barman that the hotel limits its guests to two martinis each owing to their strength. A group of revellers at a nearby table was already stumbling around after two drinks. Munnoch and Winlow pressed ahead with the third martini. Were they laid low? Of course not. The insurance industry prepares a man (or woman) for much headier stuff.

Life is good at the software house SSP. My spies tell me that they enjoyed the Christmas bash to end them all. Not only was food, drink, transport and accommodation laid on, but there were acrobats, trapeze artists, dancers and jugglers. I hope the staff were taking note – that kind of agility is going to be just what’s needed in 2009.

Peter Staddon is startling and delighting colleagues at Biba House with his luxuriant facial hair. One institute insider joked that, after the London Market Brokers’ Committee break-up, Biba can no longer afford razors. Humour is a blunt tool for some people, isn’t it?

Next Christmas, you’re getting socks

Well, ding dong merrily on high. The FSA has published its long-awaited paper on commission disclosure. But, on closer inspection, perhaps this gift is not all it’s cracked up to be. After years of waiting, the FSA has come out and said there will be ... more years of waiting. That’s right. The whole thing will be reviewed again in 2010-11.

Poor old Graeme Trudgill. One of the reporters on Insurance Times recently took a call from an ITV researcher looking for expert insurance commentators. Oddly, the young scribe did not offer my contact details, but instead pointed the TV people towards Biba’s esteemed technical and corporate affairs executive. Trudgill was duly whisked off to the seaside resort of Sandbanks where he was forced to walk up and down the coast doing take after take in the rain. He tells me it wouldn’t have been so bad, but he ended up catching the flu and is clearly pointing the figure of blame at his friends in the press. Bless you, Graeme.