RSA Ireland was today fined €3.5m and shamed by the Irish regulator which unveiled scandalous reserving practices at the insurer.

The reserving, which dates back to the scandal in 2013, shows one example of claims handlers recommending reserving of €4.75m for a claim - but just €20,000 being put aside.

The Irish regulator showed that out of a total of €31.6m recommended reserving, a mere €6.8m had been put aside (see below).

The insurer was also accused of delaying the recording of recommended claim reserve estimated increases.

The Irish Central Bank said RSA had failed to reserve properly, failed to have sound accounting and control systems, and failed to have robust governance in place. RSA admitted the breaches.

RSA said the regulator is satisfied the necessary steps have been taken and performance is better under the new management. 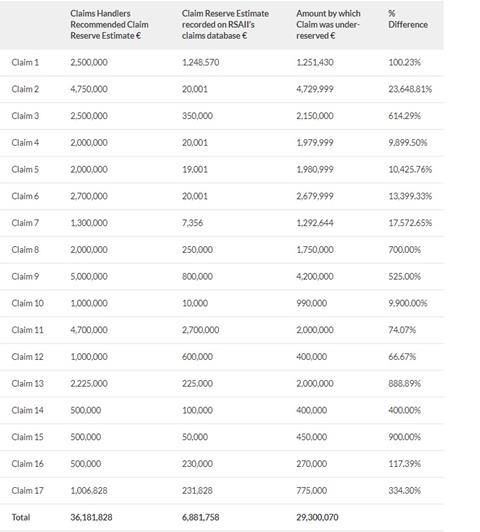