We can be sure of two issues relating to the Solvency II directive: it is unavoidable and it’s costing a bomb to implement. We look into an issue that’s less certain: what insurers will get in return for the costly and rigorous build-up to the new capital regime

The clock is ticking. By 1 January 2013, the Solvency II regulations will be in force and the insurance industry will finally begin to see the fruits of its labours in preparing for the new-look regime.

The European directive (see ‘Key facts', below) applies to all insurance and reinsurance firms with gross premium income exceeding €5m (£4.2m) or gross technical provisions in excess of €25m.

However, as insurers struggle under the weight of preparations, stress fractures are beginning to appear. As budgets skyrocket, the industry is questioning what the true cost of the regulation will be and, more importantly, what the consequences of this cost will be.

The additional capital requirements alone of complying with Solvency II will be an eyewatering £13bn, according to a report issued by actuarial consultancy EMB early last year. It worked out this figure on the basis that UK non-life insurers’ average solvency capital requirements would increase by 62%. 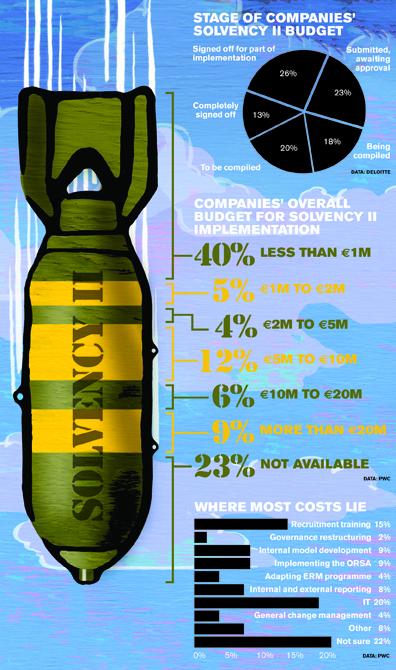 The pain doesn’t stop there, however. According to PricewaterhouseCoopers’ latest Solvency II survey, published last week, the cost of merely implementing the directive for EU insurers will far exceed the €3bn figure estimated by the Europe Commission in 2007.

In UK terms, PwC Solvency II partner Paul Clarke estimates that large insurers such as Aviva and AXA will have budgets of between £100m and £200m for the lifecycle of the project.

For Lloyd’s, the new regulation will cost nearly £250m over three years. Finance director Luke Savage says: “The market figure is £70m per annum. That is a cross-combination of development work, together with upgrading governance and risk management.”

The largest single cost by far for the industry is for specialist consultants, particularly actuaries. Budgetary inclusions for consultancy fees per insurer range from £500,000 to £10m in the run-up to implementing Solvency II.

A skills shortage of specialists with a working knowledge of Solvency II means some contractors are cashing in. KPMG partner and UK head of Solvency II Phil Smart reports a sharp spike in fees. He says: “We are seeing that the cost of contractors – actuarial and those with specialist risk skills – has really gone through the roof. The day rates have gone up by 50% or more in the past 12 months.”

And while insurers are scrambling to secure the best talent, so too are regulators. In such a highly competitive field, this extra squeeze is putting pressure on already tight industry budgets.

Clarke says: “When you’ve got the regulators looking to strengthen their own resources in these areas as well, there is no doubt at all that salary pressure for these job types is extreme.”

Forward thinking is the key to staying within budget, according to Brit Insurance Solvency II programme director Toby Ducker. “When there is a shortage of supply and an increased demand, that’s only going to push prices one way. Agreeing on the prices as early as possible this year will help insurers.”

The second biggest cost in the lead-up to the January 2013 deadline is updating data systems to cope with the new regulatory reporting required under Solvency II. Savage says Lloyd’s is budgeting for £15m to be spent on both consultants and technology. “We are spending a lot on IT, developing our capital systems to ensure up-to-date capital models,” says Savage.

The biggest element of Brit’s expenditure is developing systems and data. Ducker says the insurer’s methodology is part of a wider market trend to draw added value from its Solvency II spending. “Some firms are using budgets just to reach compliance targets, but a whole host of firms are using it to drive data transformation projects. For the benefits it will bring to the organisation, it’s worth doing.”

QBE head of capital modelling Justin Skinner agrees, but points out that the need for high-quality data is driving up costs.

“The most costly part of the exercise is data, because data systems are challenging across the entirety of the London market. Solvency II requires complete and accurate information, so that takes a huge amount of IT and data resources, and a huge effort on the part of the company to refine the data quality,” he says.

A growing concern for insurers is that Solvency II will remain an ongoing drain on revenue long after the 2012 deadline. As Smart says: “This is not a one-off cost. There will be additional costs around this, certainly in the short term.”

Managing these ongoing costs will also eat up management time – an area insurers find difficult evaluate within budgets. Law firm Clyde & Co partner Andy Tromans says: “There is going to be a lot of management time used on regulatory capital management – perhaps that is thought to be a good thing by the regulators. But, equally, you can see time is going to be spent getting the best result from a modelling perspective rather than trying to manage the business in the most effective way. You don’t want the tail to be wagging the dog.”

Perhaps the most profound consequence of the cost of implementing Solvency II is a predicted increase in mergers and acquisitions. While larger insurers have budgets for specialist staff, analysts predict that small to mid-sized insurers will opt to sell the business in order to avoid escalating compliance costs.

Smart says: “Mergers and acquisitions will probably emerge over the next few years as the burden of compliance is felt. One reason is that the cost will be too much for some of the smaller entities – for example, the requirement to have substantive internal audit and separate risk functions. Some organisations will feel the governance burden is too expensive for their cost base.”

Smart also believes the cost of regulation will place question marks over certain insurance business models. “We’ll see consolidation coming from the fact that the capital requirements coming out of the internal model or standard formula may call into question the business models for some niche insurers. They may find it too difficult to exist in a competitive environment on a standalone basis.”

One question unites all the analysts: how will insurers recoup the total spend across the programme? A 2010 Deloitte survey of 61 UK-operated insurers found that 41% of respondents were concerned with the cost versus benefit analysis of implementing Solvency II.

For the Lloyd’s market, value for money is paramount. “I really hope if we are spending that kind of money that we actually get some value out of it beyond regulatory compliance,” Savage says. “We are looking at how we can become a better run business off the back of the spend.”

Some analysts view the exercise as a benefit to the industry as a whole, rather than to individual companies. Clarke says: “If you don’t spend money, you can’t continue writing business.

Part of the cost isn’t to benefit companies; it’s to benefit the market by improving the quality of regulation.”

Skinner adds that policyholders will benefit from the exercise if the goal of Solvency II is realised. “The ambition was to help companies understand their risk profile and capital positions better. Manage these more effectively and the policyholder will benefit from a regulatory point of view,” he says.

Aon Benfield Analytics EMEA head Marc Beckers agrees with Skinner’s underlying point, but is still concerned that Solvency II may lead to insurers taking their eye off the customer service ball. He says: “The expense of Solvency II is too high for what is really needed for companies to improve their service. I’m afraid some companies are not going to invest in policyholder service quality beyond Solvency II, and that might be the wrong choice.”

As the penultimate year for Solvency II preparation begins, pennies are dropping. “There is no alternative,” Beckers says. “Solvency I, put together in 1973, was okay at that point in time. But we have moved on 40 years and we need an extra system.

“How sophisticated that system needs to be is debatable – 15 years ago, capital was never in the top five list of things for an insurance company to do; now it’s in everyone’s top three. The world has changed and we need to change with it.” IT

What is Solvency II?
The directive is designed to create a single set of rules governing what constitutes an acceptable level of insurer creditworthiness. The exercise is based on principles, not rules.

Who is involved?
About 5,200 insurance and reinsurance firms across
all EU/European Economic Area countries.

What will the regulatory framework look like?
The framework is based on a three-pillar approach. Pillar 1 sets minimum capital requirements and requires each individual firm to calculate its capital requirement. Pillar 2 requires firms to ensure they are well run and meet adequate risk management standards, and to ensure they have enough capital to meet those risks. Pillar 3 requires regulated firms to publically disclose information that is relevant to market participants.

What is the SCR?
The Solvency Capital Requirement (SCR) is the
new solvency standard, calculated annually. It
covers all risks faced by a firm, up to one-in-200-year events. SCR is calculated using either the standard formula or an internal model.