Regulator’s lack of industry knowledge in some areas such as add-ons can be a problem, while industry needs a voice with government over flooding 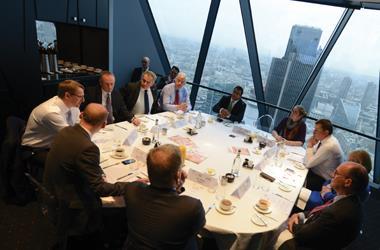 On 11 March, the FCA published the findings of its thematic review of add-ons and proposed remedies for the market.

That same morning, insurance chief executives gathered with representatives from event sponsor Accenture at Searcys Club at the top of the Gherkin at the heart of London’s insurance district for the first Insurer 50 event of 2014.

The morning’s events made regulation a major topic of the talks, but there was lots more to discuss. The executives also turned their attention to other topical issues such as Flood Re, the challenges of dealing with the government, and the disruptive forces that are changing the industry.

There was a feeling among the insurance leaders present that dealing with their two new regulators, the FCA and PRA, is not always easy.

Some felt that it was hard for companies to interpret how to meet new standards, as the rules coming from the regulators are not always prescriptive.

Also, there was a sense that some of the regulatory approaches lacked a knowledge of the industry’s workings. For example, the FCA has criticised add-ons for having a lower than average claims ratio, but some questioned whether the claims ratio was the best measure of a policy’s value to a customer.

Equally, some felt the industry could do better at explaining products to customers, in particular being more explicit about the coverage limits of cheaper policies in the same way that budget airlines are unashamedly no-frills.

Regulation in the context of insurers’ increasing use of Big Data to price policies more accurately was also discussed.

Some felt that the use of Big Data creates a paradox: it improves the experience for customers that the data determines to be a good risk, but potentially excludes those that are shown to be a bad risk.

The FCA takes the concept of treating customers fairly extremely seriously, and there were questions about whether the discrimination of certain groups of policyholders based on data would be deemed fair.

Flooding conundrum
Treating customers fairly was also the focus of talks on Flood Re, the flood insurance scheme for high-risk properties that starts next year.

The scheme has attracted much controversy, mainly because it will exclude some properties, such as those built after 2009, those in council tax band H, some leasehold properties, and small businesses.

There were some concerns that the exclusions could reflect badly on the industry the next time there is heavy flooding.There was also a sense that the government had left out band H to avoid appearing to subsidise well-off households, and so any impetus for change there must come from the government.

The Flood Re debate highlighted the industry’s difficulties in dealing with the government. Unlike banking, the insurance industry lacks a strong, unified voice. And insurers’ efforts to teach ministers about the market and effect change is bedevilled by cabinet reshuffles: a minister who has learned a lot about the industry can suddenly be replaced.

The discussions highlighted the amount of serious thinking insurers do to make sure their customers get the right cover at the right price, but also that the industry will not be in for an easy ride on any front this year.