Fraud and the RTA portal

While it has helped control legal fees, the RTA claims web portal has also become a magnet for criminal activity, say insurers. Will the portal’s extension to include casualty see an increase in fraudulent claims in that sector? 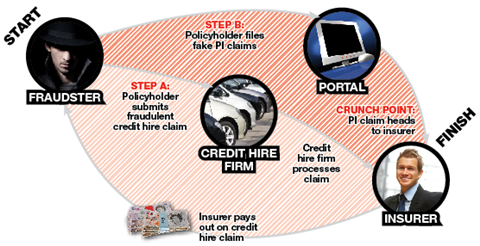 To see our infographics on the RTA portal, click on the pdf link, right.

The Road Traffic Accident (RTA) website portal is set to take centre stage now that prime minister David Cameron has teamed up with insurers to clamp down on motor and workplace insurance fraud.

Cameron’s summit talks a fortnight ago were on the back of the government’s confirmation that the portal will be extended into employers’ and public liability claims, and that the motor personal injury claims upper limit will be increased to £25,000.

The government, keen to know more about the portal, should look closely at a DAC Beachcroft survey of 10 insurers trialling it. The law firm found that the insurers it spoke to believed the portal had been helpful in controlling legal fees. But there were some alarming revelations about fraudsters exploiting the portal and unscrupulous behaviour by lawyers. Here, Insurance Times takes a look at some of the findings.

Click to read Insurance Times’s views on the story.

Credit hire has become a hub for this type of fraud because credit hire claims relate to car crashes but are excluded from the portal.

A common scam is for a fraudster to submit a credit hire claim through a genuine credit hire company. Insurers are more likely to trust the claim if it has come through a reliable company, and are less likely to be suspicious. Once this claim has been accepted by an insurer, the fraudster will then submit related PI cases through the portal, knowing that the insurer is more likely to accept them.

Where a claim falls out of the scheme, some lawyers will rush to litigation.”

DAC Beachcroft national head of credit hire Craig Dickson said: “Most credit hire companies are legitimate, but what they will have found is that their very legitimacy will have been used by the organised fraudster.

The portal is also being abused by a minority of claimant lawyers.

Insurers have accused some lawyers of submitting speculative or invented personal injury claims to the portal to get the initial £400 fixed fee on offer with no intention of continuing with the case. Insurers call this group ‘the 400 club’.

QBE head of motor claims Tom Helm said: “We are tracking claims stuck between Stages 1 and 2 and looking for trends. It has always been a concern - that we commit to pay a £400 fee up front, but then the claim is not followed through.”

We commit to a £400 fee up front, but the claim is not followed through.”

Some insurers have got wise to the practice and ask for their £400 back unless the law firm starts showing interest in the claim, according to the DAC Beachcroft research.

RTA Portal Company chairman Tim Wallis said that ‘400 club’ claims seemed to be less of a problem now than they were last year. “It seems to be receding into the background,” he said.

Wallis said that solicitors’ inexperience with using the portal when it was rolled out led to pauses between filing a claim and taking that claim forward. But Wallis acknowledged that some insurers may not be reporting the full scale of the problem to the RTA Portal Company.

Insurers have also reported that some lawyers have hiked their fees in cases that fall outside the portal, which pays only fixed fees.

This practice could increase if the government reduces these fixed fees, as David Cameron has suggested.

Another claimant solicitor tactic is to make it difficult for insurers to communicate with them. Some law firms told insurers that they would only communicate through the portal and would not accept phone calls.

AXA Insurance head of commercial motor and liability claims Chris Voller said that one law firm insisted on only sending claims forms to AXA by fax. The feeling is that some law firms did this because they were trying to make more money through stifling talks about settlement and trying to push the claim out of the portal and into litigation.

We have seen a reduction in lifecycle spends.”

Insurers have reported another issue with claimant solicitors - the hiking of after-the-event (ATE) premiums.

NFU Mutual chief claims manager Matthew Scott said the insurer was still getting “utterly inappropriate” ATE premiums of over £400 on some portal cases, but added that this was coming from a minority of law firms. However, Voller said AXA had seen a drop in ATE claims cost, with most coming in at £100 or below.

On the other hand, insurers are also not completely innocent when it comes to the portal. There have been reports that some insurers wait for a claim to be filed through the portal, then contact the claimant directly to try to avoid paying legal fees to solicitors. Wallis said this is seen as “bad practice” by the watchdog RTA Portal behaviour committee.

Extending the portal into casualty lines could attract more fraud. Organised criminals have already noticed that insurers have ramped up their motor PI fraud detection efforts and so are looking for fresh targets.

Allianz claims director Graham Gibson said: “Insurers are getting better at tackling motor fraud. That becomes hard to target for the fraudsters, so they look around and see a softer target, which has been casualty. So they migrate into that space because it’s easier.”

Criminals often fake ‘trips and slips’ claims in shops because they know that the alleged accident will often have no witnesses and be hard for insurers to investigate.

Gibson said: “You don’t need very many of these before they start becoming expensive.”

The portal’s next steps

The government was short on detail when it rubber-stamped the portal extension this month in its response to a Ministry of Justice consultation. No deadlines have been announced, but Insurance Times understands that the increase in upper claims limit to £25,000 is likely to happen by the end of this year and not later than April 2013.

There is a danger that this type of fraudulent claim will be tough to detect unless the extension gives insurers enough time to properly examine each case before accepting liability. So far the government has not announced any further details.

Gibson said insurers could transfer the claims staff and fraud detection software developed to tackle motor fraud and apply them to casualty just as easily.

He believes that fraudsters are well-organised and will be quick to find and exploit any weaknesses once the portal is extended into casualty.

“I think it is particularly crucial that this is done, given the extension into the casualty arena,” she said.

● The government’s confirmation that it would reduce the RTA portal’s fixed fees is welcome, but the government needs to fill in the gaps by saying how much the fees will be cut by, and when.

● The portal was besieged by problems when it was launched, partly because the rules - and software - governing it were still being written. The RTA Portal Company needs to ensure the extension into casualty lines is smoother.