Insurers battle on in face of raging storms and political pressure 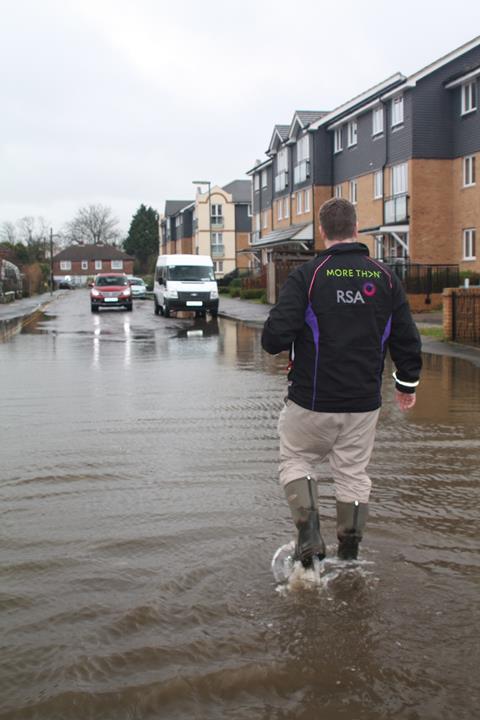 Insurers are battling to help customers despite the continued storms and political pressure to pay flood claims quickly.

The Environment Agency has recorded 5,800 flooded properties since December and warned that the flood risk is set to continue into the weekend along the River Thames and Somerset coastline.

Several communities in Surrey have also been warned to expect severe disruption as the Thames is predicted to rise in places to its highest levels for more than 60 years.

In response to the floods insurers have been helping victims by placing them in alternative accommodation and providing them with emergency funds. But they have to wait for the water to recede from their properties before the full clean-up can start.

AXA said the average cost of a claim to repair a building can run into tens of thousands for households and small businesses.

Depending on the length of business interruption, this can multiply the claim significantly. The amount of damage caused by the type of water or level of contamination could also push up the repair costs.

AXA claims managing director for commercial lines and personal intermediary Chris Voller said: “The priority for us is to get the customer into alternative accommodation.

“If the water goes down you can react quickly and get things done, but if there is three feet of water sitting in the property you really can’t do anything other than keep people comfortable and put them in funds to deal with the emergencies.”

Head of commercial property claims Martin Ashfield added: “I think for the business people it must be a worrying time for them – you have your immediate practical issue of damage, stock depletion and replenishing stock.

East Coast Cinema in Lowestoft, Suffolk, which suffered flood damage to its building during the December storms, is set to reopen today after the insurer helped it to get back on its feet.

In response to the floods Ageas’s claims teams have been working extra hours. Depending on the severity of the damage the insurer will decide on whether to get help to them straight away.

And where it haspolicyholders in affected areas it has been proactively calling them to find out if they need to report a claim.

Since December 23 Ageas has received 2560 storm and 371 flood claims. Of the flood claims reported, 48% have required a loss adjuster and 90% of these have received visits.

The insurer has also launched the first of a series of animated videos featuring an accident-prone character, Mr Ageas, who walks viewers through tips on how to protect their homes and buildings from storm damage.

Head of home underwriting Craig Allen said: “We have had some very challenging weather conditions already this winter. Clearly, in some extreme circumstances losses are unavoidable and we are there to support our customers through these difficult times.”

Aviva has a 24-hour claims contact centre and has drafted in additional staff to take calls. The insurer also has more than 200 loss adjustors on standby in all areas across the country.

Earlier this week Ed Miliband urged the government to put pressure on the insurance industry to pay claims quickly.

In response Ashfield said: “It’s an urban myth to say we don’t want to pay out quickly. It’s not in our interest to do that. We are stretched and we have scarce resources. We want to deal with these claims promptly and accurately.

“The difficulty with this is the water comes sideways and upwards – it’s a crystal ball job as to when it’s going to recede.”

Voller added: “A lot of the things being talked about politically – can insurers do those things? Insurers are doing those things.”

On Staines High Street outside Debenhams flood victims and residents whose homes are at risk of flooding have been visiting the RSA mobile van to get advice on what they should do.

Claims director David Pitt said the insurer has also visited over 90% of its customers that have reported flood claims since the start of February and has paid over £1m to help them get access to emergency funds.

He added: “A common misconception is that insurers don’t respond – but clearly we are and we are here on the ground to show that presence.

“What’s critical is to give the customer that help and assessment. Even if the water has not receded it is important the customer understands the process, such as, who is going to deal with the claim, the offer of alternative accommodation and who the contact loss adjustor will be.

“Whilst you can’t do much to get the house back to normal there is a lot you can do in the property when it is flooded in terms of looking after your customer. But you continue to monitor the water so that when it has receded you are prepared to start stripping out the property and getting the drying process going.”

Impact estimated to last for years

KPMG head of general insurance Justin Balcombe has warned of an estimated two to three-year financial impact to businesses, homeowners and the economy due to the volume of water, sewage, agriculture and infrastructure damage.

“The insurance industry is well equipped to handle large-scale events such as flooding,” he added.

“However, whilst there will be a number of large claims due to the floods, there will also be an unprecedented volume of low value claims, which will undoubtedly stretch the resources of the insurers.

With further rainfall forecast for today and Saturday, the risk of flooding is likely to increase over the next few days. There are currently 14 severe flood warnings in force for the Thames Valley area.

LV= said it has had a high volume of claims registered and is ready to deal with more tomorrow as it prepares for what is expected to be the most severe wind storm of the season. So far the insurer has had 7,000 storm and flood claims.

The insurer has a central adverse weather event response planning team and has cross-trained its staff to help on the claims lines during surge events to make sure customers can get through quickly.

An LV= spokesperson said: “Our main priority is always to settle claims quickly and to reassure customers that we will do whatever we can to help them get their lives back to normal throughout this difficult time.”

Balcome says the storms will be a “challenging” test for insurers in terms of claims handling processes and procedures. However, it will present an opportunity for the industry to innovate and refine their claims processes for any further events.

AXA says it has invoked its contingency plans around providing extra resources by ensuring they have more staff.

Ashfield said: “It has been a gradual and ongoing event as opposed to a single specific event. It has not been as catastrophic as 2007 – we are probably seeing volumes that are about one-fifth of that, however it has been ongoing and therefore things start to aggregate.

“We are holding up well at the moment. It is the ongoing nature that makes it a different one to deal with really. This what we are here for. There is a sort of Dunkirk spirit that kicks in with insurers on such occasions and this is one of them.”