RSA, Aviva, LV= and AXA were all winners in the motor market last year, growing market share and improving performance, according to a new report by Ernst & Young’s actuarial department.

Aviva grew its market share from around 9% to 10% and AXA from 5% to 6%, the UK retail motor insurance report reveals.

They all notched up an underlying net combined ratio better than the industry average of 116.4% in 2010.

Highway performed especially strongly, going from an underlying net combined ratio of 122% in 2009 to a little bit above 100% last year.

Losers were RBSI, NFU and Brit, which all lost market share and suffered deteriorating performance.

NFU was the biggest loser as net combined ratio deteriorated from 130% to 135%.

But NFU stressed its performance was affected by some underlying factors.

A spokesman said: “The doubling of our mutual bonus scheme had a significant impact on our net combined ratio in 2010.

“Our net combined ratio for motor in 2010 was within the margins we had expected and better than the industry average.”

The report shows that commercial motor performed worse than private motor last year and was heavily reliant on reserve releases to prop up results.

Underlying net combined ratio was 116% for private motor and more than a percentage point worse for commercial, at 117.1%.

Commercial motor’s result was better when reserve releases are included, bringing down the reported net combined ratio to 110%. 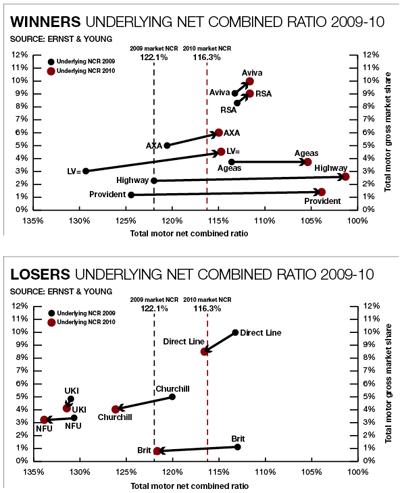 “I suspect there will be some reserve strengthening in commercial motor either next year or the year after that, but it’s difficult to tell,” said commercial motor manager of Allianz Commercial, John Dye.

“I think over the long term we need more rate through the commercial motor book because I do not see it as profitable or sustainable.”

The publication of the Ernst & Young report followed new figures from the government showing that the volume of motor insurance fines has increased more than seven-fold over the past half decade.

Home office junior minister James Brokenshire informed Labour backbench MP Chris Ruane, in a written answer issued last week, that the number of fixed-penalty notices issued for vehicle insurance offences climbed from 2,688 in 2005 to 20,045 in 2009 – the latest year for which figures are available.