In the wake of a devastating flood of toxic slurry from a major aluminium processing plant in Hungary, readers of Insurance Times' sister title StrategicRISK indicated in our latest poll that the threat of rising environmental liabilities is a serious concern. Almost all of the 89 risk managers polled (85%) said that they are concerned by the threat of rising environmental liabilities in Europe.

Our reader research on environmental risk comes at a time of heightened awareness of the threat on land and at sea posed by heavy industrial operations. BP is still counting the cost after its Macondo oil well exploded in the Gulf of Mexico, devastating the pristine natural habitats of hundreds of species and making life very difficult for coastal communities too. This may have contributed to the heightened awareness of environmental risk demonstrated by our survey.

Proving that we now live in a reputation economy, most (42%) respondents said that the single biggest environmental risk to their business was the reputational hit they would receive following an environmental slip. This trumped regulatory fines (14%) and carbon reduction targets (3%). 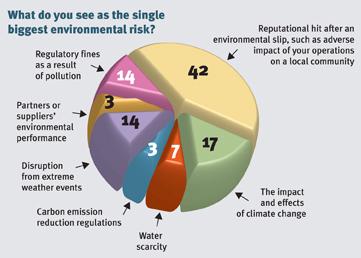 In a related finding, a ‘better reputation with customers, investors and regulators’ was cited by 55% of the survey as the biggest benefit to be derived from environmental risk management. 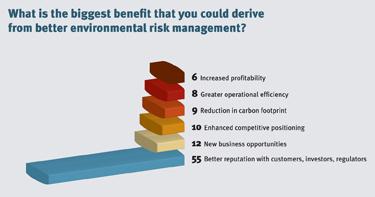 The physical effects of the changing global climate and weather patterns were also highlighted as environmental risks, but none featured as prominently as the potential for bad press following an environmental upset. The impact and effects of climate change (17%), disruption caused by extreme weather (14%) and water scarcity (7%) all figured as risks. Interestingly, very few respondents (3%) were concerned about their partners’ or suppliers’ environmental performance. Either they are happy that their suppliers have their environmental controls wrapped up, or they did not see this as having an adverse effect on their own operations.

Uncertainty around environmental liabilities is still seen by a significant number (39%) of readers as a big obstacle to managing environmental risk – this despite all of the communication from insurers about the potential risk. The finding probably reflects the fact that Europe has yet to see many significant test cases to judge exactly how strict the regulators will enforce environmental liabilities, as well as how big the fines and remediation costs will be. Don’t be fooled though. The message from industry experts is that these will be large. 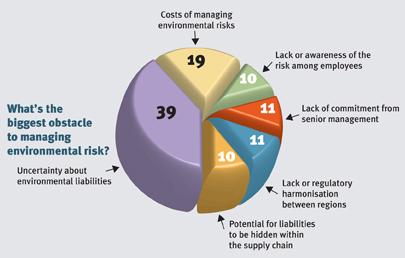 Executive management are the ones who exert the most pressure on organisations to improve their environmental performance, according to 42% of the survey. Business leaders are more influential in doing so than regulators (16%), NGOs (10%), local communities (9%) and customers (5%). 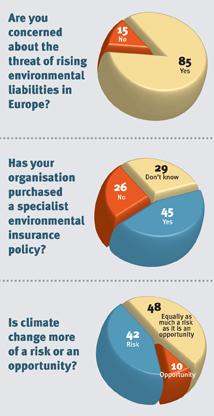