Shore Capital analyst Eamonn Flanagan described the reliance on ancillary profits as a worrying trend. “The sustainability of these earnings remains in doubt, due to both the potential changes from the Jackson Review and because the age of austerity is likely to test the discretionary element of such income.”

But Stevens said ancillary income, both as a percentage of profits and amount per vehicle, was in line with levels held for several years. “The reason it has grown so much is that we have a lot more policyholders, rather than that we are making a lot more money per policyholder.”

Stevens credited part of Admiral’s ability to grow quickly and remain profitable to its success in underwriting business from price comparison sites. Admiral estimates comparison sites accounted for 52% of the UK motor market in 2010, up 16% from 2009. “Price comparison is really survival of the fittest,” he said.

While Admiral has again performed better than its UK motor rivals, Stevens said the company could not rest on its laurels. “Some of our competitors have been energised by poor results to change their business and do things better. If they do that, it is a challenge to Admiral.”

One area of focus will be the challenges posed by the European Court of Justice’s ban on gender-based underwriting. Stevens said it would call for analysis of the rating to recapture the loss selectivity previously available using gender. 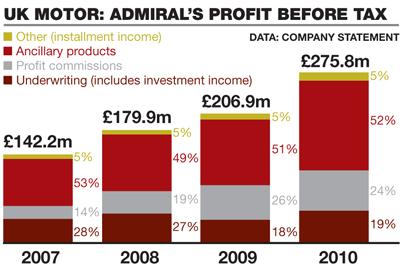