Battle of the brands: Admiral is swiping market share from its rivals

While Admiral's growth is impressive, RBSI will be aggressive in its fight to claw back customers

Admiral's turnover increased by nearly 50% last year to £1.58bn, it announced last week, but its stunning growth has to come from somewhere. So who is losing out?

Admiral's 2010 results presentation to analysts (see table below) shows that the Cardiff-based insurer is gaining market share at the expense of Royal Bank of Scotland Insurance (RBSI), parent company of Direct Line and Churchill.

That's not surprising, since RBSI is the UK's biggest personal lines insurer.

But what is noticeable is just how many customers RBSI is losing to Admiral: last year 13.8% of Admiral's customers in net gain came from RBSI. 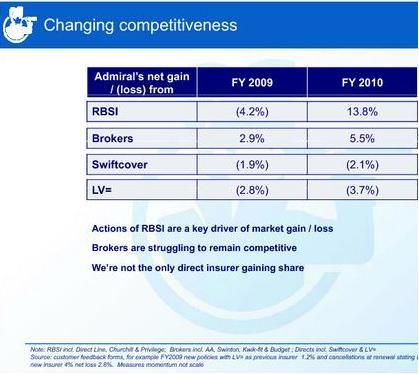 In a market where price is everything, Admiral, which has not suffered the same bodily injury losses as RBSI, was able to undercut its biggest rival.

However, next year Admiral will probably struggle to take that many customers off RBSI again. RBSI is looking to grow before its sale, which will probably take place in 2013, and is certain to be more aggressive on its pricing and deals.

The big fight back

Cost-cutting in terms of jobs and offices closures, scaling back of taxi and fleet, the run-off of NIG's private motor business, plus the £868m reserve strengthening over the past two years, should pave the way for RBSI to offer more competitive premiums and claw back some market share in motor.

RBSI's operating profit improved noticeably in the fourth quarter of last year, losing £9m compared with a £33m loss in the third quater, leading to chief executive Paul Geddes describing it as a 'turning point'.

The insurer is also being very aggressive in household, which will make it more difficult for Admiral to pull in customers for its planned household launch, probably in 2012.

RBSI is offering a deal to beat the current home insurance policies of its competitors. That's despite nearly all insurers saying they will hike rates by at least 10% in household as a result of two severe winters.

2010 was an annus horribilis for RBSI, with Admiral a key beneficiary. At least in 2011, the feeding frenzy of rivals taking away its customers should finally be over.