Positive signs amid the gloom

With ongoing economic woes, huge hikes in FSA levies and ferocious competition, it is little surprise that many UK brokers may have trouble sleeping at night. The Insurance Times State of the Nation survey offers an exclusive insight into the trends and issues that are affecting the UK’s broking heartland. Unsurprisingly, these bugbears continue to spark anxieties.

But, despite the hard times, a mood of optimism is gathering.

After years of battling a soft market, many brokers have reported the first signs of hardening rates, while the majority of respondents expect to see business volumes increase over the next year.

So what is the main vexation keeping brokers awake? The economy remains a big concern, with half the survey respondents citing its sluggish performance as worrying. But this is swiftly followed by the steep hike in Financial Services Compensation Scheme (FSCS) levies, with nearly half (49%) of respondents describing regulation and compliance as a source of concern. More than a third (35%) said their total regulatory costs had jumped by between 11% and 25%, while nearly a quarter (23%) said their fees had spiralled by between 26% and 50%.

Full cost of the fees hike

This hike in fees has forced brokers to take action. Many have introduced or raised charges on customers, delayed investment in training and reduced corporate hospitality.

The biggest victim, however, is technology. More than a third of broker respondents (33%) reported that increased regulatory costs had forced them to delay investment in technology and capital.

“Technology continues to play an ever- increasing part in a broker’s day job. The fact that brokers are putting off investment in IT is concerning. The costs of regulation has a lot of knock-on effects, of which this is one,” says Biba head of compliance and training Steve White.

A smaller portion of respondents had been forced to take more drastic action by withdrawing from lines of business (13%) or laying off staff (8%). Regional broker Perkins Slade’s associate director Lynn Richards-Cole warns that if the levies continue to rise, a greater number of brokers will be forced to respond in similar ways. “For some businesses, these increases may equate to the equivalent of a job,” she explains. 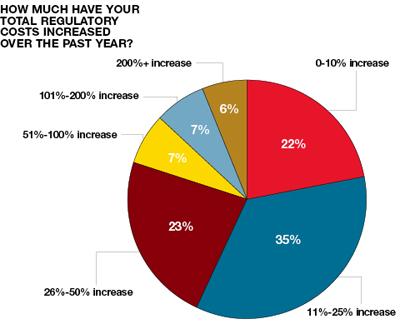 Commercial brokerage Bloomhills managing director Matthew Stringer has seen fees soar by 30% over the past year, forcing the brokerage to introduce new charges. He points out that FSA proposals to increase levies by a further 10% would portend disaster for many small brokerages.

“It is like throwing vinegar into an open wound. The question is: where will it stop and what is the justification for it? If it carries on, there will be a point where we have to look at increasing fees or cutting costs. Some businesses will face closure,” he says.

Biba’s Steve White explains that escalating FSA fees remains the biggest concern of broker members. “The direct and indirect cost of regulation affects the smallest and largest brokers,” he says.

“If you look at Europe, the regulatory cost burden on UK brokers is three times higher than in Ireland, which is the second highest in Europe.”

Personal lines broker Ashbourne Insurance managing director Peter Smits says fees for the broker’s two offices have jumped by 50% and 70%, respectively. He adds that the soaring fees have forced the broker to increase charges and curb expenditure on marketing.

“We try not to increase charges but there are instances where it is impossible not to. The FSA is creating the very thing it is trying to avoid because it is inevitable that the end user – the customer – is going to be hit by an increased fee,” he says.

“The one thing that concerns me more than anything is the increased cost of running a business. Every time the government passes legislation, it seems to cost the sector money.”

The tough economy, along with stringent regulatory costs, has forced many brokers into adopting a wait-and-see attitude. The majority (41%) stated they had made no specific changes to their business, while the vast majority of brokers avoided investing in additional staff (87%) over the past year.

Many brokers have avoided redundancies, however. According to the survey, 18% of respondents cut their numbers of administration staff but only 11% of brokers reduced client-facing staff. Richards-Cole explains that, like many respondents, she has opted to shed non-skilled staff and shore up on technical expertise. “We are recruiting now,” she says.

“We did lay off non-technical people but no technical staff went.”

Stringer explains that like many respondents, he is treading with caution. “People are just keeping a tight ship at the moment – not letting too much out of their business. Take no one on and get rid of nobody – that is what we are thinking,” he says.

According to the survey, the fashion for joining broker networks appears to be waning. Only 9% of brokers joined a network or alliance during the past year.

Smits believes this slowdown has been driven by insurers rather than brokers. “Brokers look to networks because they think they have more access to exclusive products and higher earnings. But insurers have been saying for a while now that they are not sure broker networks are the way forward.”

Although only 5% of brokers bought or sold a business in the past year, the appetite for acquisitions seems to be stronger. More than a fifth of brokers (21%) bought another business during the past year. 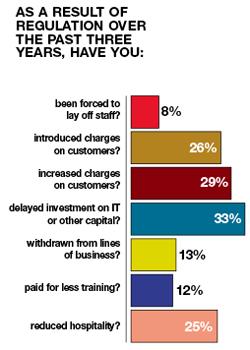 Inkling of a harder market

The good news is that the much-longed-for hard market appears to be dawning, albeit mainly in the motor market. More than a third of brokers (36%) have reported hardening rates over the past 12 months. According to Smits, motor rates have jumped by as much as 40% in the past year. “I think we are going to see some stabilisation. We have already seen 35% and 40% increases over the past year. We are definitely in a hard market,” he says.

But he adds that these increases have been offset by the spiralling costs of FSA regulation. “At a time when motor insurance premiums are increasing, the pressure is on us to provide a cheaper price to customers. This means that regulatory costs put even more pressure on a business,” he says.

Not all have experienced this much anticipated rise. Commercial lines have remained static, with a third of brokers reporting little movement. “We have seen rates stay the same. Insurers are gearing up for Solvency II, there is still plenty of capacity in the market place and insurers are keen to get business in,” says Richards-Cole.

But after the seven-year soft market, brokers are in an optimistic mood. Nearly half (48%) of respondents predicted further rate increases over the next year.

Open jaws of the direct insurer

But again, an optimistic mood prevails with nearly half (48%) predicting a growth in volumes in 2011. Financial and professional lines, including directors’ and officers’ cover, made the biggest increase, with 41% of brokers reporting a healthy performance in this sector. The biggest dip was seen in standard personal lines with 39% of respondents reporting a decrease in business volumes.

Most brokers (49%) cited direct insurers as their main bête noir. “Until a year ago, we were cursing the aggregators,” says Smits.

“But now we are seeing the resurgence of direct writers. These are reputable well-known brands. While we justify that 10% extra that we charge because of the personal services we provide, it is hard to justify that when direct insurers are writing at whatever price they want and they have the slick operations to back these prices.”

The shadow cast by aggregators shows little sign of waning, with 40% of brokers citing these competitors as their main concern. “For us, the greatest threat is from the aggregators – they offer huge schemes at ridiculous rates; they are the main competitors,” says Stringer.

Richards-Cole has a different experience. She cites the threat posed by national brokers and strong independent regional players as the biggest headache.

Nearly a fifth stated that staffing problems were foremost in their minds. Richards-Cole says brokers still find it difficult to attract high quality candidates. “We struggle to get the right calibre of people. We can get people but the question is whether they are the right people? We like people who are focused on examinations and increasing their knowledge of insurance,” she says.

The message from the survey is clear. The broking nation faces many struggles, but a palpable mood of confidence is gathering as brokers look forward to better months – and better sleep – to come.

- Will the new regulatory body, the Prudential Regulatory Authority, bring about fairer fees for broker in 2012?
- How can the insurance sector lobby effectively to reduce the regulatory cost burden on brokers?
- Will the sector see more brokers pull away from broker networks and alliances?