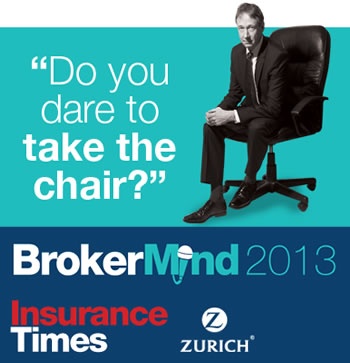 This year’s BrokerMind competition is set to launch on 15 May at Biba 2013 with Joe Grogan, David Martin, Jim Herbert taking to the BrokerMind stage. Don’t miss the live challenge at 3:15pm on the Zurich stand (B1).

BrokerMind will launch at 10:00am on 15 May on the Insurance Times website and brokers will be able to compete for their place at the final event to be the best mind in broking. 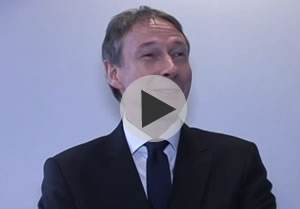 The BrokerMind challenge is brought to you in association with Zurich:

“When it comes to mitigating risk, the expertise of Zurich makes a big difference, both for customers and forward-thinking brokers. BrokerMindis your chance to show the industry everything you know about helping customers to mitigate their risks - the ultimate demonstration of expertise.”

Congratulations to the winner of BrokerMind 2012 - Owen Jenkins, Marsh.

1. Promoters: Zurich Intermediary Group, UK Life Centre, Swindon SN1 1EL. (”The Promoter”)
2. The Promoter is not responsible for incorrect contact details provided or for problems with entries caused by any factors outside of its control.
3. Entrants must be a resident in the UK and aged 18 or over.
4. No purchase necessary to enter the competition.
5. The competition will run from 15 May 2013 to 30 September 2013.
6. Employees of Newsquest Specialist Media and Zurich Insurance group of companies, and their families are not eligible to enter.
7. Prize winners will be the entrants remaining in the competition as determined by Newsquest Specialist Media’s interpretation of results.
8. Prizes are to be announced shortly.
9. Prizes may be liable to tax. Any tax liability shall be the responsibility of the winner.
10. Travel, insurance and other expenses are not included unless stated.
11. The Promoter will attempt to contact winners via telephone, post or email by 30 October 2013.
12. The Promoter reserves the right to choose alternative winners if contact cannot be made with the original winners by 30 November 2013.
13. The Promoter’s decision is final and no correspondence will be entered into.
14. Zurich Intermediary Group accepts no liability for the prize or for any loss or damage arising from it.
15. No cash alternative is available.
16. The winners will be determined at a live final staged in October 2013. Details of the final will be announced nearer the time.
17. There will be a special launch competition available for BIBA attendees to enter only. This launch special will run from 15 May 2013 to 16 May 2013 and the winner will be fast tracked to the livefinal in October 2013.
18. Winners may be asked to participate in PR or publicity activities.
19. The Promoter reserves the right to disqualify you from the competition and refuse, withhold and/or recover payment of the prize from you, if the Promoter (i) has suspicion or evidence of manipulation of the competition (whether through technical steps or otherwise) by you or anyone acting on your behalf; or (ii) has reasonable grounds for believing that you (or someone acting on your behalf) are using the competition for purposes other than that for which it was intended or are committing any offence; or (iii) determines that you (or someone acting on your behalf) have breached these terms or the terms and conditions of any relevant third party, charges and proceedings may be brought against you or any other person who manipulated, or tried to manipulate, thecompetition and the Promoter reserves the right to report you and/or those persons to any relevant authority if the Promoter becomes aware or suspects that you and/or those persons are involved in any such activities.
20. By entering the competition, you are deemed to accept these terms and conditions (including consenting to the disclosure of your name to third parties should you win in accordance with the terms of clause 25 and those of any relevant third party. Any failure to comply with these terms and/or conditions may result in your disqualification from the competition.
21. The Promoter reserves the right to provide substitute prizes of similar value should the specified prizes become unavailable for reasons beyond its control. Unless specified otherwise, the prizes are not transferable.
22. If any provision of these terms and conditions is held invalid by any law, rule, order or regulation of any government, or by the final determination of any court of a competent jurisdiction, such invalidity shall not affect the enforceability of any other provisions not held to be invalid.
23. Details of the winning entry can be obtained from Rachel Douglass, Events Logistics Executive, Newsquest Specialist Media by telephone on 0207 618 3492.
24. In the event of any dispute, Newsquest Specialist Media’s decision will be final.
25. Zurich Intermediary Group takes no responsibility for lost, damaged or delayed entries.