Accusations of a compensation culture in the UK have gained traction as personal injury and payment protection insurance claims have exploded. In our online debate, AXA’s David Williams and the Claims Standards Council’s Andy Wigmore went head-to-head to thrash out the issues 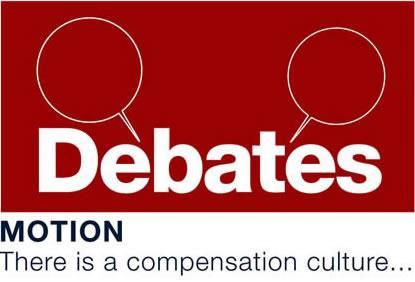 The motion ‘There a compensation culture’ was fiercely debated by both AXA commercial lines and personal intermediary managing director of underwriting David Williams and Claims Standard Council policy director Andy Wigmore in a debate on insurancetimes.co.uk earlier this month. But in the end, an overwhelming 73% of Insurance Times readers agreed that a compensation culture does exist in the UK.

Williams, arguing for the existence of compensation culture, said he “thoroughly enjoyed” the debate. But he added that he was not sure his point of view would be victorious owing to the strength of both sides of the argument.

He said: “In our industry we always seem to have two sides: insurers saying there is a compensation culture; claims farmers and lawyers saying it’s not that bad. Therefore, I genuinely didn’t know which way the vote was going to go.”

Williams added that hearing the views of the readers was as interesting as the overall voting. He said his favourite comment was from a poster called David Matthews, who said that anyone denying a compensation culture existed was either in denial or making money from it.

“Sadly, I think that’s very true,” Williams said. “I get bombarded constantly by telephone calls, text messages, people pestering me; whether it’s an accident I may not even have had, or PPI claims - it’s just awful. The UK population has just about had enough.”

Wigmore said he found the experience interesting, and added: “The debate is important, and placing those arguments on the table is also important, which I hope I did, and I saw David in the same vein.”

But Wigmore added that he thought that the phrase ‘compensation culture’ was widely misunderstood, including by some of those commenting on the debate online.

“Because, actually, if you’re an insurer you probably want a compensation culture,” he said, “because if one claims against the other, they’re getting the maximum amount of money from it. So I find it highly amusing when you see some of the comments that are put about.

“Insurers, everyone in the sector, is culpable in fuelling the industry as it is. Everyone benefits, everyone has their hands in the pockets of each other.”

Wigmore added that he thought Williams had helped kickstart the reform of referral fees by raising the issue several years ago, and mentioning that insurers were just as guilty asother financial services firms.

“The money merry-go-round, as Jack Straw put it - his assessment was about right,” Wigmore said. “As a consequence of that, now everyone’s been exposed, you have the opportunity to clean up or recalibrate the market in a way that’s acceptable to every part of that sector.

“The idea that insurers are whiter than white in any of this is utter pie in the sky.”

David Williams is AXA commercial lines and personal intermediary managing director of underwriting. He has more than 20 years of experience in general insurance, and has been an outspoken critic of referral fees, credit hire, high legal fees and spiralling whiplash claims. Williams is also a non-executive director of AXA Assistance UK and chair of the
CII Underwriting Faculty.

Andy Wigmore is policy director for the Claims Standards Council. He was the driving force behind setting the CSC up in 2004. When the Ministry of Justice took over the regulation of claims management companies, Wigmore converted the CSC into a trade body. He is also managing director of the Wigmore Media Group, and a director of case management firm Health & Case Management.

The debate itself saw Williams and Wigmore crossing swords over a number of questions, the main one being whether the UK does indeed have a compensation culture.

Williams said this was undeniable, and added: “I think anybody who says that we don’t have a compensation culture problem is just blind.”

He added that insurers handled about 570,000 whiplash claims a year, at an average rate of one per minute. “What we have,” he said, “is a compensation culture, represented by those whiplash numbers, but fuelled by the Access to Justice Act and claims farming, which is getting worse and worse.”

Wigmore, however, rejected the idea of a compensation culture.

He said: “If you take a look at the actual figures of those accidents that occur in this country, you could argue that they have been paying pretty much static over the last five or six years. There have been slight rises, but nothing that would actually demonstrate that there is a compensation culture.”

Another key question asked of the debaters was how they would describe the current system for whiplash personal injury compensation.

Williams said that the whiplash claims process was more suited to making money for third parties than compensating the genuine victims.

He added: “We have a process where seriously injured people are auctioned off on websites; we have a legal system where fees are so high that 75% of them can go out in terms of referral fees.”

Wigmore said that the diagnosis process was dated, and that if it were brought up to date, it would remove a large chunk of spurious whiplash claims.

“Most claims are frivolous and verging on fraudulent”

“If you dealt with as many false claims as I see, there would be no doubt in your mind”

“I can’t believe so many people are kidding themselves there is no compensation culture, I agree insurers partly to blame!”

Insurance Times readers have overwhelmingly voted that a compensation culture exists and that it is a problem. Here we lay out the best and worst case scenarios for the issue.

The best-case scenario is that the curbs on referral fees and compensation culture laid down in the Legal Aid, Sentencing and Punishment of Offenders (LASPO) Act work properly. Lord Jackson’s reforms would ban referral fees, stopping unscrupulous claims management companies (CMCs) from selling claimants’ details on.

This would in turn stop the rising tide of whiplash claims, and reduce motor premiums. The current Ministry of Justice (MoJ) consultation on better regulating CMCs could also help crack down on the bad practice of some firms. The MoJ is interested in improving its regulation of CMC marketing practices, such as cold-calling and the sending of text messages.

The worst case scenario is that the LASPO Act fails to effectively stop referral fees and compensation culture. This could happen if alternative business structures (ABSs) are used to hide the payment of the fees, meaning that claimants would still be encouraged to make spurious or exaggerated personal injury claims.

A common worry is that some CMCs could merge with law firms under an ABS banner, and continue to hunt for personal injury cases to profit from.

Williams said: “If people find ways through ABSs and other ways to continue to earn money from compensation culture, that would be the worst vision.”