At Insurance Times’s latest top-level forum, chief executives compared notes on the government’s Flood Re solution, playing a soft market, return on equity challenges and getting their message across to the business 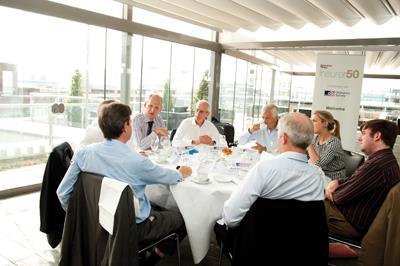 Some of the biggest names in UK general insurance gathered in the Sky Bar of London’s Grange Hotel for Insurance Times’s third Insurer 50 event, held in partnership with Ordnance Survey.

Overlooking stunning views of St Paul’s Cathedral and the capital’s ever-growing skyline basking in glorious sunshine, the group of chief executives wasted no time in getting to grips with a full agenda of hot topics at this exclusive event.

The Flood Re option

First on the agenda was the matter of flood risk properties and the announcement that the government has chosen Flood Re as its preferred solution to the problem of the expiration of the Statement of Principles.

The choice has been generally well received by insurers. It is seen as a breakthrough that the industry will look to build on in the coming years.

As the only non-insurer or broker-backed offer on the table, the event’s attendees agreed that the government had been wise to opt for a scheme that will not be damaged by possible bias from companies with a vested interest in the outcome.

While the road to the agreement has been long and hard, the insurance executives said they were pleased the open market had been avoided.

This would have marginalised owners of high-risk properties, who would otherwise have struggled to find adequate cover for their homes.

However, attendees voiced concern that if the UK is exposed to severe flooding during Flood Re’s early days, the commitment of the government could be put to the test. Any severe losses that exceed the one-in-200-year events that Flood Re is designed to cover will force the government to dip into its own pockets. It will have to demonstrate its commitment to the cause by backing up its support with cash.

Executives at the event acknowledged that the cycles of the insurance world have always been difficult to navigate, but in today’s perma-soft market the challenge is more difficult than ever.

Insurers need to react quickly to any events that threaten to harden the market, as large amounts of excess capital can quickly move in to take advantage of the situation and act to lower rates.

This overreaction on behalf of capital providers means that, when a hard market does emerge, the effect is short-lived and emerging developments are quickly stifled to the detriment of sustained growth.

Struggling investment markets are largely to blame for the huge amounts of available capital in the marketplace, said the executives. Institutional investors such as pension schemes are looking to the insurance industry as a way of diversifying their portfolios and increasing returns amid a weakened economy.

Insurer performance is also suffering from the deflated economy, the group agreed.

Not only can investment returns no longer be relied on to save a company from poor underwriting performance, but the return on equity (ROE) it can expect for shareholders is also falling. Insurers once targeted between 12% and 15% ROE for stakeholders; now, 7% to 8% is a more credible figure.

And while larger entities may be able to achieve these returns with a break-even combined operating ratio of 100% by taking on more investment risk, capital requirements mean that smaller insurers must look to their underwriting performance in a competitive marketplace.

With shareholders also looking for sustained growth from the business, this makes the ROE proposition an even more challenging task. As a result, privately owned insurers often find it easier to turn a profit, as they can selectively cut back on unwanted risks without upsetting shareholders intent on premium growth at all costs.

In the tough and varied nature of the insurance world, and with insurers often working across different lines and cycles, it is difficult for chief executives to action the strategy they talk about at board level, said attendees at the gathering.

Top managers must approach staff in an informal way and put a human face to the corporate message to communicate their goals effectively, they said.

Frequent contact with regional teams and an open nature will allow employees to engage with the management team and get involved openly with the strategic message that is being delivered.

“It’s always interesting to exchange views with other chief executives, and I suppose it’s not remarkable that, at one level, we all have very similar challenges. Leading people and leading change are unremitting tasks - and welcome ones, or we wouldn’t be doing this.
“There are challenges that face all leaders and some that are peculiar to the insurance market that each of us occupies. We just have to keep trying, understanding what works and what doesn’t - and trying again. But it is certainly good to talk - and also to listen.”

“The great thing about Insurer 50 is that it is a meeting of peers - all people who are successful in their own spheres.
“Hearing about challenges in what are sometimes very different markets from our own is always stimulating, and gives a useful and alternative perspective on the broader issues in the insurance sector.”

“The great thing about Insurer 50 is that it is a meeting of peers - all people who are successful in their own spheres.
“Hearing about challenges in what are sometimes very different markets from our own is always stimulating, and gives a useful and alternative perspective on the broader issues in the insurance sector.”