Is sovereign debt a cause for concern?

When it comes to holding bonds from struggling economies, insurers have more than just Ireland to worry about

The Irish financial crisis has drawn attention to the global insurance industry’s exposure to the government bonds of the weakest European economies of Portugal, Italy, Ireland, Greece and Spain (PIIGS).

Exposure to Ireland alone is causing some insurance groups difficulties. Last week, rating agency Standard & Poor’s put the financial strength and credit ratings of five Dublin-based subsidiaries of large insurance groups under review for a possible downgrade following its decision to cut Ireland’s sovereign rating to A from AA-.

S&P contended that its downgrade of Ireland’s sovereign rating weakened the insurers’ capital adequacy and investment portfolios through deposits with Irish banks and their holdings of Irish government bonds. For example, RSA Ireland’s deposits and bond holdings accounted for 20% of the unit’s total assets and 86% of shareholders’ funds, while the deposits and bond holdings of Dublin-based Aviva Europe comprised 31% of assets and 200% of shareholders’ funds. Tis week, research from investment bank Nomura showed that Munich Re was the most exposed of its peer group to Irish bonds, both in euro terms and in terms of the percentage of its total non-linked assets. The reinsurer has a €2.4bn (£2.02bn) exposure to Ireland, which accounts for 1.2% of total non-linked assets.

The firm with the next-largest exposure was Zurich financial services, with a comparatively small 0.6% of total non-linked assets in Irish bonds, totalling €1.2bn.

However, there are fears that Ireland’s fiscal troubles could spread to the other weaker European economies, meaning that insurers have more than just Ireland to worry about.

Stockbroking firm Execution Noble also put Munich Re at the top of its exposure list, pointing out that debt of southern European and Irish countries – in other words, PIIGS excluding Greece – made up 38% of the reinsurer’s tangible book value and 6% of its total investment portfolio.

This compares with an average of 16% of tangible book value and 2% of the investment portfolio of the companies Execution Noble covers (see table, below). 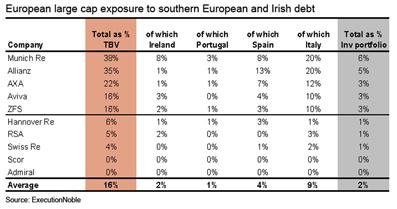 Jefferies analyst James Shuck said that, thanks to Munich Re’s strong balance sheet and low risk exposures, it now trades at a 20% premium to the insurance sector. However, a bid to increase bond yields has led to an increase in PIIGS exposure, especially through covered bonds, and so near-term sentiment about the stock may suffer following the recent concerns about Ireland’s financial situation and rumours that there will be further contagion.

Munich Re is far from alone: Nomura’s research, for example, indicated that Italian insurer Generali had the biggest euro exposure to Portugal, Italy, and Greece among the large listed European (re)insurers, with €3.7bn, €44.4bn and €4.2bn of these countries’ government bonds, respectively. Allianz, AXA and Fondiaria also have large exposures to Italian bonds, at €29.4bn, €15.7bn and €14.3bn, respectively.

According to the Execution Noble data, Allianz has almost as much exposure to southern Europe and Ireland as Munich Re, and its 13% exposure to Spain is larger than Munich Re’s 8%.

However, although the exposures look large in euro terms, analysts have downplayed their significance to the insurance groups in question. Execution Noble, for example, noted that a bulk of the exposure is in Italy and Spain, which currently look in a better position than Ireland and Portugal, judging by credit default swap spreads.

As such, Execution Noble thinks insurers should be more worried about movements in the remaining 95%.

“Whilst we would expect further mark to market losses on these assets in Q4 and potentially into 2011, the offsetting movements in the rest of the portfolio are likely to have a much more significant impact on balance sheets than this high-profile, but materially small exposure for these names,” wrote Execution Noble analyst Joy Ferneyhough in a research note.

Exposure to weakened European economies’ government debt has certainly given the insurance industry a nasty jolt, but it is far from life-threatening.