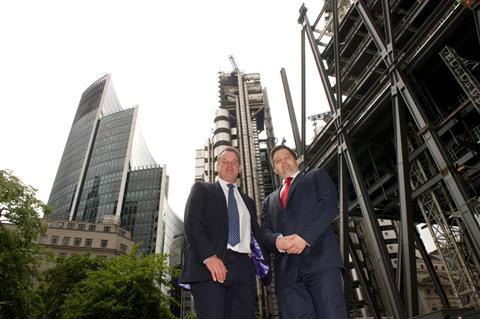 It’s been a while since any of Aon’s top team appeared in Insurance Times. But with so much going on at the broking giant, Aon’s well-drilled public relations team is keen to beat the drum for its achievements in the UK. So today they’ve put forward Lambros Lambrou, chief executive of the Global Broking Centre, and Jim Herbert, Aon Risk Solutions UK chief executive.

In the past year Aon has hit the headlines with its controversial carrier charge, its risk database GRIP (Global Risk Insight Platform) and its decision to relocate its Chicago headquarters along with the group management to swanky new offices in London. We meet at Aon’s four-storey offices in Devonshire Square, a place that will look quaint compared with its new offices, part of the 736ft building dubbed the “cheese-grater”, at 121 Leadenhall Street.

We kick off by examining Aon’s performance in 2012. Insurance Times’s Top 50 Brokers will be published next month, a list that Aon has topped for five years running. It stayed at number one in last year’s ranking with brokerage of £640m despite negative growth, after having put clear water between itself and its nearest competitors Marsh and JLT back in 2009.

Perhaps the top dog fears that its market-leading position may be in danger?

Herbert says: “We achieved high single-digit organic growth in H1, which is ahead of plan so clearly a good position to be in, but it’s a challenging market so we had to run pretty hard to achieve those results.”

It is solid growth given the bun fight that’s happening in the beleaguered UK corporate space.

It’s a big job, especially for Lambrou, who has 11 years’ experience in the Australian office under his belt, giving him a broad global outlook. He is also credited with leading Aon’s innovative GRIP data analytics tool, which shook up the market when it was introduced in May 2009.

Meanwhile, Herbert, described by one commentator as “a safe pair of hands”, is a seasoned regional corporate broker, with a good grounding in the London market.

As to their strategies for achieving profitable growth, people come first. Aon has fallen victim to its fair share of personnel raids by rivals, but Herbert is unbowed. “If you want to develop and employ the best people then you also create the risk that they will be attractive to our competitors,” he says.

Acquisition would be another obvious growth strategy, but price is likely to be a deal breaker in the case of debt-laden UK takeover targets. Aon last year ran the rule over Oval, but walked away. “It’s an interesting situation …” Herbert says.

Lambrou cuts in: “Our absolute preoccupation day to day is organic growth. The firm has an appetite to make acquisitions if there is an opportunity. We focus on acquisitions in terms of the value they create for our customers, not in terms that we must acquire because we must stay number one.”

Lambrou does a good line in corporate-speak. When asked whether Aon is still pushing the Aon carrier charge - a 3.5% commission fee to insurers for administration services, which has met resistance - he sounds well briefed. He mentions “continuing discussions” and “bringing business value” to clients, but refuses to be drawn in.

Get Lambrou on a topic where he feels safe, however, and he springs into life. Client focus is Aon’s mantra, which brings us to GRIP. Aon asked not to focus on GRIP in this interview, but it’s worth dwelling on for a moment. The real-time electronic platform tracks all the broker’s placements globally, from submission to quotes and binding. Insights from this data are sold to insurers, but clients can also use it to find out the best deals.

“We think we’re doing a great service to our customers by bringing to light areas where the carriers are falling short,” Lambrou says. “I wouldn’t suggest that everyone in the industry would necessarily support that, but that’s OK. That’s their approach.”

GRIP is seen as such a competitive advantage that it has driven Aon to cut out third parties in wholesale business. The thinking is that Aon’s retail brokers, rather than a rival broker, should place business with Aon’s wholesalers. It means the Aon retailer, Aon wholesaler and client can all use GRIP.

The bottom line is that Aon is guarding its groundbreaking database, shielding it from rival brokers at all costs.

Of all the topics we cover, though, Manchester United is the one that makes both Lambrou and Herbert spontaneously light up. The £80m, four-year shirt sponsorship also draws out Aon’s most vicious detractors. “They have one man and a dog in the Manchester office, and they send the dog to see the clients,” says one sharp tongue; an old joke, apparently.

“You look at the Manchester United sponsorship and think of it as a brand awareness issue. It’s actually much, much more than that to us,” says Lambrou, a lifelong Man United fan.

“Like them, we strive for perfection, and if we don’t achieve that we’ll settle for excellence. From my perspective Man U is the greatest example of a star team leading a team of stars.”

After dominating the Premier League in the past decade, Manchester United lost the championship on goal difference to deadly rival Manchester City in 2012. Aon will be hoping it doesn’t follow suit.

• This year’s Top 50 Brokers report will be published on 30 August.

Hometown: Leicestershire
First job: Setting up bands (roadie)
Family: One daughter
Interests: Motor cycling, playing the guitar
In his own words:
‘It’s a challenging market so we had to run pretty hard to achieve good results’

Hometown: London
First job: Graduate trainee, Alexander Howden, London
Family: Married, one daughter
Interests: Travel, food, sports, playing football on Sunday mornings
In his own words:
‘We focus on acquisitions in terms of the value they create for our customers, not because we must stay number one’

Market view:
An energised business, but it has a number one position to defend