This includes Aviva as well as Legal and General

There were 11 insurance firms that reported a drop in revenue in 2020, including Prudential, Aviva and Legal and General, according to statistics from data and analytics firm GlobalData.

An aggregate revenue of $1,923.9bn was reported by the top 20 global public insurance companies in 2020, showcasing a year-on-year decline of around 5% in top line performance last year. 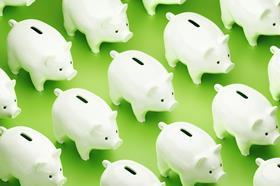 Read more…Top five insurers ranked on underwriting performance – which is the most profitable?

Most of the top companies witnessed a decline in new business activities and premium income.

Firms were also affected by a decline in investment return, owing to a lower interest rate environment and uncertainty in financial markets against the backdrop of the Covid-19 pandemic.

What firms were affected?

The main firm impacted was Prudential due to a substantial rise in outward reinsurance premiums, which amounted to $32.2bn, up from $1.6bn in the previous year.

This is because it paid Athene Life Re for reinsuring its in-force fixed and fixed index annuity business.

This subsequently brought down its net earned premiums steeply by around 75%.

In addition to this, there was a 5% decline in its gross written premiums (GWP) due to lower new business premiums from Asia, as well as lower sales of fixed annuities and fixed index annuities in the US, which abetted the revenue decline.

Meanwhile, Aviva has been selling off its non-core businesses to steer gains for developing its core markets in the UK, Canada and Ireland, as well as increasing shareholders’ return. This also aims to mitigate lower investment returns.

Parth Vala, company profiles analyst at GlobalData, said: “Unlike Prudential, Aviva suffered due to its weak investment returns, especially from its UK and Ireland life business and manage-for-value business in France and Italy, where its income from investments dropped by 51%, 70%, and 28%, respectively.” 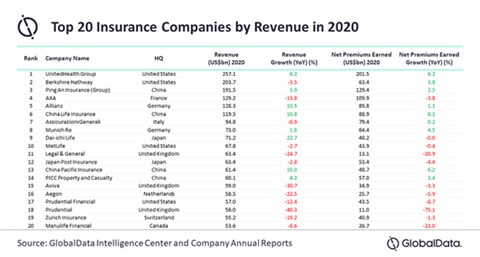 On the other hand, Legal and General derived approximately 80% of its revenue from investment activities.

As a result, the firm saw a 26.1% contraction in its investment income in 2020 to reach £39.2bn, compared with £53bn in the previous year - this greatly impacted its revenue stream.

The insurer saw a 37.1% drop in gains on financial investments designated at fair value through profit or loss and a 24% decline in dividend income, which adversely affected the overall investment return of the company.

Zurich Insurance Group was also impacted. The insurer’s revenue stream from investment income almost halved in 2020 compared to the previous year, reaching $12.3bn from $24.8bn - this can be attributed to a 56% decrease in investment results on unit-linked investments related to its life insurance business.

However, Dai-ichi Life outperformed the top players, with revenue growth surpassing 20%. This was due to the weaker currency Yen allowing the company’s returns from its investments to soar significantly over the previous year.