Tempted to dip your finger into the honeypot of potential business that social media sites offer? Make sure you don some protective gear first

Insurance brokers using social media websites as part of their corporate communications could be compared to beekeepers out to collect a swarm.

Facebook has more than 500 million active users worldwide, Twitter has more than 160 million and there are 99 LinkedIn groups related to UK insurance. Capturing the attention of these millions of potential customers buzzing around the social media space can be highly rewarding for organisations of all sizes, but – like beekeepers – brokers must be on guard to avoid being stung.

“Social media offers great potential to reach audiences in an environment that is more emotive, personal and experiential than an average brands’ websites,” says strategic director at integrated marketing agency TDG Financial, Andrew Golding. But he adds: “Those that play with it do so at their peril. They can be so quickly chewed up and spat out that it can shatter their very existence.”

Everyone has a voice

According to CFC Underwriting business development director Graeme Newman, brokers and insurers will inevitably begin to “use social media in more innovative ways” over the next few years.

He believes the benefits are evident.

“Messages can be distributed and spread globally at almost no cost, every individual has a voice, private details are routinely made public – it is unregulated, uncensored and largely uncontrolled.”

But it is the very attributes that make social media so powerful that also make it so dangerous. The expensive lawsuits it can generate, for instance, can be devastating to a broker.

They also need to be wary of infringement of intellectual property rights if third-party content is not properly referenced. Third parties could also leave negative comments about their business in public forums.

So how can brokers manage this minefield of risks and get their messages across without getting themselves into hot water?

Biba has issued guidance on navigating this tricky territory. In October, it published two six-page template legal documents compiled by law firm Beachcroft to help brokers understand and manage the risks involved in using sites like Facebook, Twitter and LinkedIn. Members can download the template – Social Media Policy and Managing Social Media – which sets out terms and conditions of social media use, from its website .

Beachcroft partner and author of the documents Emma Bate says: “In the past 12 months, social media has become ubiquitous, and brokers have either started to think about using it or need to start thinking about using it.

“These documents were produced to raise awareness about the risks, so brokers aren’t scared off by the potential legal pitfalls,” she says.

Biba itself has got involved. It entered the social media arena in February last year on Twitter under the moniker @BIBAbroker, and it now has 528 followers. The organisation also has a YouTube and LinkedIn presence.

“We use social media to share discussions and keep brokers up to date with what we are doing as trade associations,” Biba head of communications, Leighann Burtrand, who runs the group’s social media operation.

AXA uses social media to communicate with its personal lines broker community, but “to avoid abuse”, it only allows access to Twitter and LinkedIn to a select few in the company. Senior marketing manager at AXA Personal Lines Michael Wolfe says: “To ensure our communications are consistently appropriate for our network of brokers, we have a set of official social media guidelines we adhere to. Personal use is not permitted.” 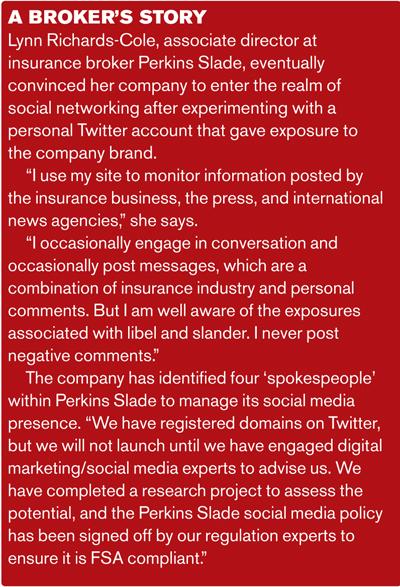 Get the experts in

AXA also drafted in social media expert Craig Freeman, digital account manager at marketing company FWD, to educate brokers on how best to employ social media. Freeman says that where companies have gone wrong, is to appoint one central professional to manage it.

“That’s too corporate and it’s not real,” he says. “It’s about presenting thought leadership and knowledge, and having four or five people talking in the same tone of voice. That works best. People want to trust their expertise and skills.”

But he adds that brokers should “communicate sensibly”. “Think before you post – don’t just react,” he says. “Be warm, open and behave as you would when networking,” he says.

If the risks related to social media are managed well and brokers send out the right messages, a honeypot of clients could be theirs for the taking. IT 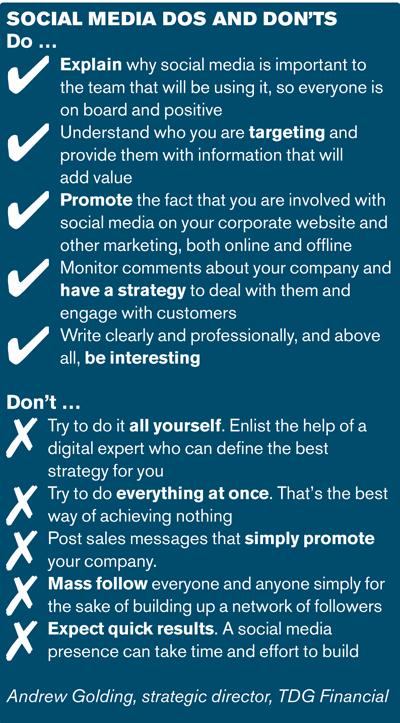