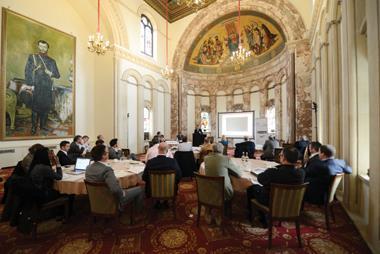 Members of the Broker 50 were in for a treat for the first meeting of 2014.

The house and its grounds are an oasis of calm and greenery sandwiched between Luton airport and the M1 motorway. The house has had an impressive roster of distinguished guests - The Queen and Duke of Edinburgh spent part of their honeymoon there in 1947.

If the opulent surroundings were not enough, brokers were treated to food, wine, shooting, archery and an evening address by former Conservative cabinet minister Michael Portillo.

It was just as well that the surroundings and the social programme were so inviting. In the opening session of the Broker 50, attendees were subjected to a gloomy UK economic forecast by economic think tank the Institute of Economic Affairs (IEA).

The presentation suggested that the country’s debt level was vastly underestimated and the coalition government’s efforts
to cut it was so far little more than tinkering.

The next presentation, by the Boston Consulting Group (BCG), suggested that insurers have a poor grasp of the value of the business individual brokers bring to them.

According to the BCG, there is a huge variance in the profitability of business brought by different brokers. But insurers typically do not measure profitability at a broker level, instead tending to base relationship importance on broker size, which is not always a good indicator of profitability.

BCG advocated that insurers and brokers work more closely together to ensure deals were mutually beneficial.

IMD II sparks debate
Brokers were also told by Biba about the latest regulatory developments. Delegates heard while it is encouraging that mandatory commission disclosure appears to have been dropped from the European Union’s revision to the Insurance Mediation Directive, known as IMD II, it might be too early to celebrate.

The European Council and Parliament have yet to pass the directive. If it is not passed before May’s elections, there is a risk that mandatory commission disclosure could be reinserted.

This sparked a debate among brokers. Under the current UK system, brokers are required to disclose commission on request, but so few clients request the information that some felt mandatory disclosure would give clients unwanted information.

But others said that if brokers are uncomfortable with talking to clients about what they are paid, it indicated that they felt something was wrong.

If the brokers were weary after their day of activity they didn’t show it. They were still buzzing with talk about the day’s presentations and discussions late into the evening.