In the personal lines element of this year’s Insurance Times Broker Service Survey, the top spots may have been held by old favourites, but it is the handful of new entrants that have really shaken up the competition. We take a closer look at what brokers in this sector really value

The Insurance Times Broker Service Survey this year has produced a clear overall winner: Chubb has topped the rankings not just for commercial but also personal lines. Chubb retained the top place in personal lines once again, with Hiscox in second place. Oak Underwriting shot up to third place, moving up from sixth position in last year’s personal lines ranking.

This year’s league table saw few companies retain or improve their positions. Far more saw a fall in ranking, some quite dramatically. Apart from the leading triumvirate, three companies stand out: LV=, RSA and Towergate.

The acquisition of two brands that ranked 11th (ABC) and 15th (Highway) in 2009 enabled LV= to hold on to 11th place this year. RSA was the only major insurer to improve its ranking: it moved up by four places, to joint 18th. And Towergate shot up a surprising five places, to rank 15th.

There were six new entrants to this year’s league table, and five of these have caused significant disruption to the rank order. Three of the six new entrants – Amlin, Chartis and Ansvar – took the forth, fifth and sixth positions and, together with Plum Underwriting at nine, dampened the impact of improved performances from some of last year’s participants.

If not for the new interlopers, for example, Sterling would have moved up the ranking by one place from five, but had to be content with seventh place instead. Fortis’s deserved one-place jump from seventh place did not show up either; it had to settle for 10th. 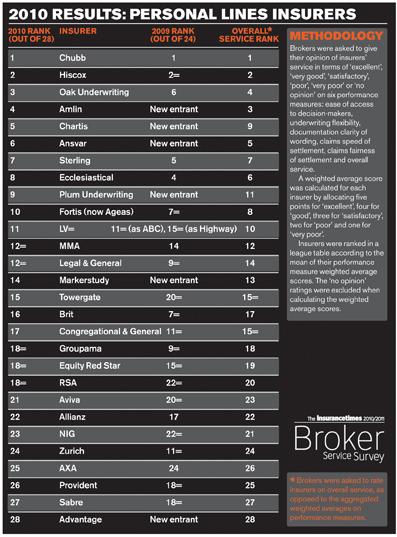 Many of the changes that we made to the commercial lines survey were extended to personal lines too. The number of performance measures was increased from four to six, and the terminology that we used to describe categories was tightened to more closely reflect the service that our research indicated was most valued by brokers. 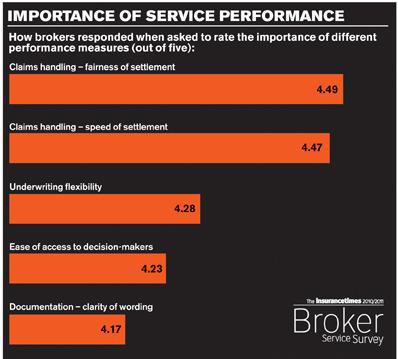 The new ‘overall service’ category introduced for commercial lines was also brought in for personal lines. This allowed brokers to reflect on their overall experience. Comparison of ‘overall service’ scores with ‘total scores’ – derived by averaging the individual service performance measures and used to produce the headline league table – showed almost as much variation as was seen for commercial lines. This suggests that some insurers’ service is judged better or worse overall than the sum of its parts. Yet again, it seems reputation plays a big part.

These changes, plus those new entrants, accounted for many of the dramatic falls in ranking. But it was Zurich that took the biggest knock, falling by 13 places to 24th. Even removing the impact of the new entrants, this still equates to an eight-place drop.

So who has improved their personal lines service the most? The rankings provide a snapshot of how well insurers are doing, but the survey went one step further and asked the question directly. Aviva won hands down after receiving almost double the votes of the second-placed contender, Fortis (now Ageas), with AXA in third.

Back to what you know

The individual comments supplied by brokers are a key aspect of the Broker Service Survey and much valued, adding colour to the raw data. Once again, brokers were happy to give us their forthright views, both positive and negative.

We asked for suggestions about how insurers could improve their personal lines service. Brokers’ gripes included insurers not offering enough flexibility both when asked to match a competitor and when underwriting risks to meet the needs of particular clients. Many brokers thought that the extensive reliance on technology to produce standardised products often failed to meet customer need.

As one broker put it: “Insurers should show greater flexibility and get back to underwriting risks, rather than being bound by what the IT system says.” Clearly it’s time to think more outside the box. IT