The results of the 2010 Broker Service Survey commercial lines ranking have been announced. But how do this year's rankings compare with 2009?

ACE improved its ranking position by the highest number of places in 2010 moving from 14= in 2009 to 4= in 2010. It delivered a good all round performance falling no lower than 7th in any individual service performance ranking, and it achieved 2nd place in the ‘underwriting expertise and flexibility’ ranking. One broker summed up ACE’s improved performance by stating “far from being a fairly sleepy giant, ACE have woken up and are proactive, helpful and sensible”.

Travelers, on the other hand, saw the largest fall in its ranking position moving from 6th in 2009 to 18th out of the full 37 insurer ranking (17th out of the 2009, 31 ranked insurers). Although the insurer dropped several places on all individual performance measure rankings, it saw its largest falls in claims categories moving down from 3rd in 2009 for claims handling to 15= for ‘claims speed of settlement’ and 23= for ‘claims fairness of settlement’ in 2010.

Yet eight brokers voted Travelers as the most improved insurer in 2010, but too many others had little positive to say. One broker summed up his claims experience by stating “Travelers find new and novel ways to repudiate even long after the initial repudiation has been questioned”.

Catlin also experienced a large drop in the rankings moving down from 4= in 2009 to 14th (out of 37) in 2010, the reverse of ACE’s strong 2010 performance. It saw its largest falls in three areas; ‘ease of access to decision makers’, ‘quality of cover’ and ‘documentation’.

Catlin’s ‘ease of access to decision makers’ ranking plummeted 13 places but it experienced an even greater drop for ‘quality of cover’ where it fell by 16 places in the ranking. Its score for ‘documentation clarity of wording’ achieved only a 26= ranking, its worst performance on any service measure. 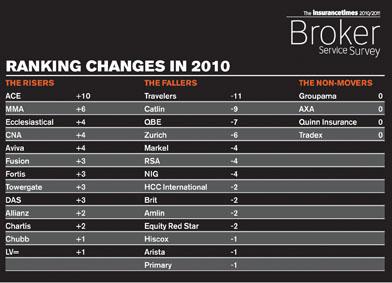 The ‘total score’ used to compile the headline ranking was calculated by averaging an insurers’ scores across these performance measures.

Although a similar methodology was applied in 2009, making a direct comparison of 2009 and 2010 ‘total scores’ is tricky as several changes were made to this year’s survey. For starters an additional six insurers/underwriting agencies that were felt to be making their mark were included in the survey. These firms were Congregational & General, Legal & General, Oak Underwriting, Sterling, Sabre and Provident. Also, the number of performance measures that brokers were asked to rate was expanded from five to eight as feedback from insurers had indicated that the performance measures were too general.

One further change was how brokers assigned their ratings. Instead of requesting ratings on an ‘a’ to ‘e’ scale where ‘a’ represented the highest service standards and ‘e’ the lowest, brokers were asked to indicate their preferences against the terms ‘excellent’, ‘good’, ‘satisfactory’, ‘poor’ and ‘very poor’. A ‘no opinion’ option was also provided to eliminate guesswork in cases where brokers genuinely had no knowledge or opinion. This was particularly important for claims ratings where around 25% of brokers used the ‘no opinion’ option. 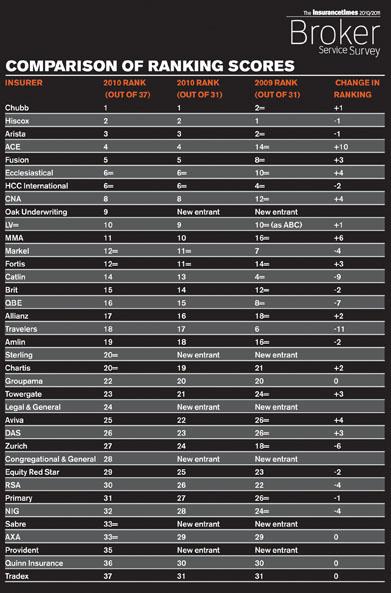