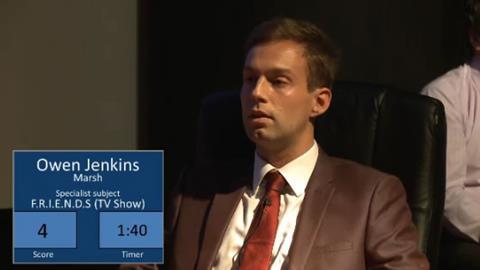 When you find yourself in front of a tense studio audience, under glaring spotlights and with John Humphrys sitting at a desk opposite you shuffling question cards, you had better be sure you know your stuff.

At a hugely successful Insurance Times and Zurich event, held at the May Fair Hotel in London yesterday, all four BrokerMind finalists proved they had not only done their homework, but they were ready to fight to be crowned The Best Mind in Broking.

Sutton Winson claims executive Lyn Langton couldn’t quite match his score despite a fantastic display of knowledge in her chosen field, Maine Coon cats, scoring a solid 12 points in the most esoteric round of the day.

Up next was Marsh client advisor Owen Jenkins who didn’t miss a beat to clock up an incredible 22 points in the first round in his chosen subject: the TV programme Friends.

Following this was Knightsure managing director Tony Knight, who had a lot of work to do to catch up, and did an admirable job securing 15 points on his specialist subject, the life and times of Tony Hancock.

Going into the second round, Jenkins’ form remained, scoring a winning 10 points in the general insurance knowledge questions and securing the title, while Jon Newall and Tony Knight both finished the competition with 24 points apiece. Newall secured second place however, due to having clocked up fewer passes.

Speaking after his victory, an elated Jenkins said: “I’m very pleased, I’d like to thank my colleagues for coming to support me, I could have done it without them, but it was good to have them there anyway. And to the other contestants I want to say that everybody deserves to win at this stage and they were all great.”

Zurich Insurance managing director UK commercial broker David Smith presented the first and second place prizes to Jenkins and Newall, with both contestants given two hospitality tickets for a top UK sporting event of their choice, while Jenkins was also awarded a free business leadership consultancy session with Performance Associates.

John Humphrys was in his element as quizmaster, testing the audience’s knowledge and putting on a great show, both for the people in the room, and also for Insurance Times’ online audience who were able to live stream all of the day’s events.