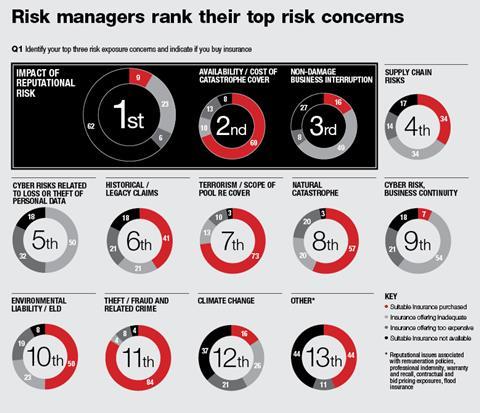 The latest ‘stress ranking’ for risk managers - a list of risk concerns produced each year by risk managers association Airmic - also puts the price of natural catastrophe cover and business interruption among the top three concerns.

Social media has added an element of speed and unpredictability to the nature of reputational risk, which particularly sets risk managers’ nerves on edge.

“It is extraordinary how quickly a small event can become unmanageable thanks to social media,” says Arcadia Group head of risk management Colin Campbell.

The cost of natural catastrophe cover also remains a high concern, especially after last year’s tsunami in Japan and floods in Thailand.

“You can have a plant in a part of Thailand unaffected by floods, but suddenly insurance is not so easily available or costs are higher just because it’s in Thailand.”

“Ironically, the only one to have two different suppliers was Ericsson, which is the firm that needed it least. Everyone else was caught short and ended up competing for an alternative supply,” Heyworth says.

“Cyber risks are mostly linked to e-commerce, which has exploded in the past couple of years.

“Insurance is available and it is wider and less expensive than a year ago, but I am not sure it is providing exactly what we want as yet.”

John Lewis Partnership group insurance manager Andrew Ingram agrees: “Cyber cover is embryonic. Most buyers would say they don’t know what they are trying to do with the cover. It is so nebulous it is hard to work out what you need in the way of protection.”