Eurozone crisis: Who should most fear a euro crash?

The European debt crisis has spread to Italy and Spain, taking crisis fears to a new high. Could the most eurozone-exposed UK insurers present a threat to the industry as a whole? 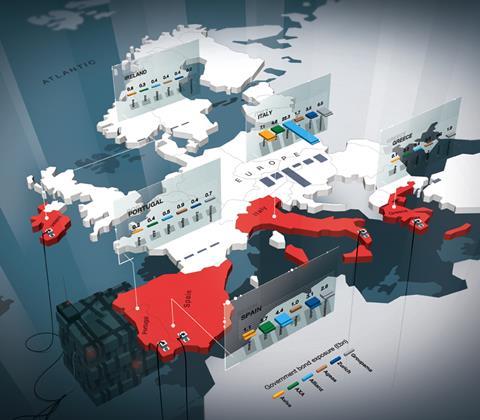 To see the full infographic, click on the image link, right.

As bickering European politicians fail to find solutions to the continent’s debt crisis, contagion is entering a new and more dangerous phase as the problems spread to the larger countries of Italy and Spain.

A smaller territory like Greece reneging on its sovereign debts is possibly manageable, but a default by a larger country would be extremely damaging for the insurance industry.

Insurers with large UK operations most at risk are composites with life and general insurance arms. The big six here are Ageas, Allianz, Aviva, AXA, Groupama and Zurich.

That’s because those insurers have accumulated a large amount of peripheral European government debt to cover their payments to life policyholders and, to a lesser extent, general insurance policyholders, across their European operations.
Most market commentators believe a default by either Italy, Spain or even France is unlikely; a ‘tail risk’. But as investors demand even greater interest payments on sovereign debt issued from those countries, pushing them into bailout territory, the risk of a catastrophic default grows.

One crumb of comfort for insurers is that history suggests they are better equipped than banks to deal with a default. During the Latin American debt crisis of the 1980s, insurers survived and the banks collapsed. Insurers had a much better balance of investment mix, so assets offset liabilities. Even if the euro disintegrates, and countries return to their historic currencies, it may not necessarily be a doomsday scenario for insurers.

For example, a newly issued German Deutschmark would probably shoot up in value against rival European currencies. That would help German-based Allianz offset losses on peripheral holdings. France-based AXA could be more vulnerable, as the newly issued French franc would not have the same level of strength to offset losses elsewhere.

So just how exposed are our ‘big six’ to potential eurozone disaster? A deeper look at their peripheral debt exposure, solvency ratios and the views of the rating agencies suggests that things aren’t always as they first appear. Read more in ‘Eurozone crisis: Insurers’ financials under the microscope’.