Manchester roundtable: Why schemes are no quick win

In a tough market, brokers and insurers are looking to schemes to provide much-needed stability - but they need a commitment of at least three years to see real benefits 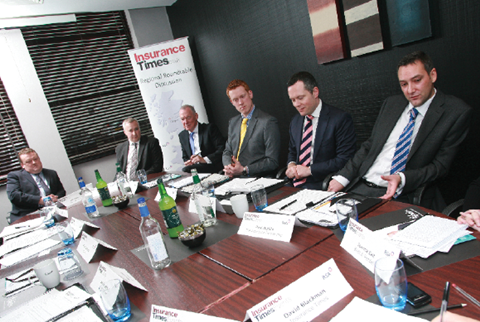 Both brokers and insurers have a growing appetite for schemes, fuelled by the impact of the recession, an Insurance Times roundtable found last week.

The Insurance Partnership head of schemes and affinity Paul Buckle told the event, which was held in Manchester and sponsored by RSA, that  “schemes are ‘de riguer’ at the moment”.

He argued that a key attraction of schemes was that they offered a way of insulating against the vagaries of the open market. “In hard and soft markets, you would see a price differential of 15%-20%. Schemes offer greater stability,” he said.

Most of our schemes are procured through a trade association or an affinity: they do it because they are not getting what they are looking for [on the open market].”

T L Dallas director Polly Staveley said there was a “huge desire” among brokers to run schemes, which she added were particularly appealing in a tough market.  “People see it as a quick win: something to latch onto in the current market.”

RSA regional director, north, Gareth Hilton said schemes offered brokers the opportunity to differentiate themselves from competitors on the basis of their expertise rather than price.

There’s a danger of a mad rush to the schemes party: it needs to work in terms of efficiency and for the end customer.”

He added: “Schemes are on the rise, but there will always be an open market.”

Staveley warned brokers and insurers against seeing schemes as a ‘get rich quick’ tactic, arguing that they needed time to work.

She said: “You need a three-year commitment at least from an insurer, to see whether it’s going to be successful.”

Schemes are a way of leveraging your purchasing power.”

Paul Buckle, head of schemes and affinity, The Insurance Partnership

Buckle told the roundtable that the vast majority of scheme proposals within his firm were weeded out at the internal vetting stage. He said: “Eighty to ninety per cent of them are a great idea but would be very poor schemes.”

But he added that some insurers were better equipped at processing scheme proposals than others. “Some insurers are built for it and they can do it very quickly. Other insurers don’t know what they want to do, and you get a disparate sum of the parts.”

We are all shuffling around the same pot of business.”

Buckle also warned against the risks of ignoring the back-office management of schemes.

The roundtable participants also heard that, in trade association-based schemes, there was evidence of switching from one scheme to another, as the market matured and bodies looked for better deals than those on offer from their established schemes.