Despite the market’s progress in improving inclusivity, ACIN says there is still a long way to go

Lloyd’s 2020 survey revealed that less than half (46%) of black people working in London believe that senior leaders create opportunities for everyone, compared to 74% of all respondents.

Plus, nearly a third of black employees included in the survey have seen people turn a blind eye to inappropriate behaviour, compared to just 15% of all respondents. 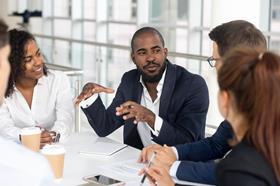 Commenting on Lloyd’s culture survey results, Godwin Sosi, co-founder at ACIN, said: “All progress is encouraging. We are very pleased that Lloyd’s has said it will work at ‘improving the experience of black and minority ethnic talent as a top priority’, but there’s a long way still to travel.

“ACIN is here to provide hands-on help to any Lloyd’s or London market company that wants to improve its racial inclusion by implementing [ACIN’s] ’Six Steps’ and to support their diversity through ACIN Recruit.”

Some of its recommendations echo the themes identified in Lloyd’s culture survey, for example creating a culture of inclusion and to develop, track and report ethnic diversity metrics.

ACIN co-founder Junior Garba added that some Lloyd’s companies have already begun to implement the Six Steps by:

Garba continued: “We’re pleased that the survey revealed improvements to gender-related equality in the marketplace.

“Obviously half of visible ethnic minority people are women, so that’s good news for our members. Plus, we know that a better gender-balanced workplace is typically a more inclusive one.”