The UK motor insurance market is expected to descend into an underwriting loss for 2019, despite reporting a record year for underwriting profits in 2018.

The latest research from EY has predicted a combined operating ratio (COR) of 105.7% for 2019, an 11 point increase on the record-breaking 12 months to the end of the previous year.

EY UK general insurance market lead Tony Sault said the marked turn in the fortunes of the market is the result of a softening of premiums, despite ongoing tough market conditions.

“While 2018 saw the best underwriting result since records began in 1985, the outlook for 2019 has markedly deteriorated and is expected to firmly enter into the red – and stay there for the next year at least,” he said. “The market has softened at a quick pace, with falling premiums due to intense competition in the market.

“This is in spite of the continued high inflation on damage claims, brought on by the increasing cost of repairs on new technology-integrated cars.” 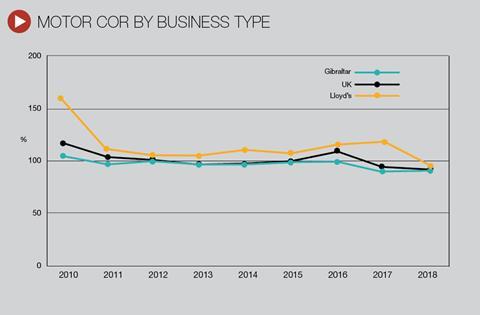 Find out how 2018 was a record year for motor insurers

EY found that this claims inflation has been running at around 6%, largely driven by damage inflation and the increasing cost of repairs due to the increased use of technology in new vehicles.

The one-off release of reserves that contributed to the 2018 result is also expected to be partially reversed due to the lower than predicted Ogden discount rate announced in July, which EY says will impact the market COR by approximately one percentage point.

Despite the upward pressure on costs, motor premiums have been falling over the last 12 months, although this could ease over the course of 2020 as insurers begin to take remedial action on pricing.

EY expect premiums to increase over the next nine months as insurers respond to high repair cost inflation and adopt a cautious stance given the uncertainty over the implementation date of the whiplash reforms.

When ultimately delivered by the Government, EY expects the reforms to cause a marked reduction in premiums, resulting in an average saving of £30 per customer.

But despite the potential for increased premiums, EY’s forecasts predict that underwriting losses are expected to continue into 2020, with a forecasted COR of 106.8%.

“Looking ahead, 2020 is set to be a year full of uncertainty,” Sault said. “In addition to Brexit, underwriting losses are expected to be exacerbated, and the introduction of Whiplash reforms look likely to be delayed beyond next April. Insurers will also be paying close attention to the FCA GI Market Study and the extent of reforms and remedies imposed on the market.

“There’s a lot for the industry to contend with, but it’s crucial that insurers try and put themselves in the best position possible. They need to retain a focus on differentiating their propositions and using the latest technology to help drive down costs and improve their customer offerings.”