RBSI still has work to do despite profit turnaround

The insurance group, which includes household names Direct Line and Churchill, has made a step in the right direction with its return to profitability, but there are signs that there is still much work to be done. 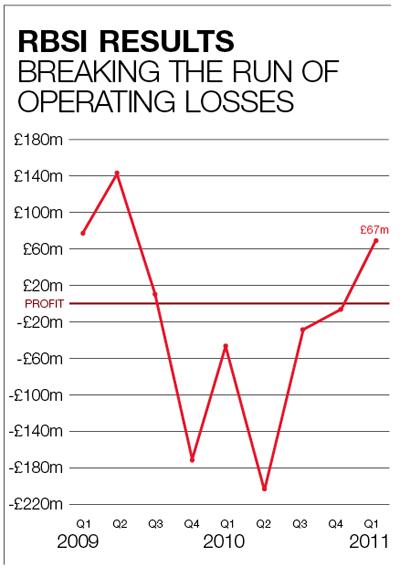 RBSI chief executive Paul Geddes hailed his company’s return to profitability. “It is an important day to have crossed that line and returned to profit. These are material improvements in a year,” he said.

But despite RBSI’s small technical profit of £3m for the quarter, there is clearly still further room for underwriting improvement. The insurance group’s combined ratio came in at 106%. This is 10 percentage points better than the 116% reported in Q1 2010, but still puts RBSI at an underwriting loss.

Equally, the technical profit of £3m showed that the bulk of the £67m profit came from the £64m of investment income reported in the quarter.

Geddes acknowledged that, while an important one, the Q1 result was only one step on the road to recovery for RBSI. “I wouldn’t downplay the strength of the result, but clearly we are only some way through our transformation and turnaround plan,” he said.

He added that while the Q1 improvement was down to repricing and reducing the risk in RBSI’s book of business, the full effects of the turnaround efforts were not yet observable in the results.

For example, Geddes said the company is piloting and rolling out new claims initiatives and continuing work to make its costbase efficient – which he described as “well advanced”.

In addition, the pricing changes are still working through the book. “That heavy lifting we are doing now is not fully visible yet in these results,” he said.

First-quarter results have presented a mixed picture so far, largely because companies are facing their own challenges and write varying mixes of business.

RBSI is clearly moving forward with its return to profitability, and is justifiably pleased at what it has achieved in very challenging market conditions.

Of course, RBSI is a different animal, with its heavier focus on personal lines and motor. It will be interesting to see how Zurich’s results compare with the other more diversified UK groups like RSA, Aviva and Allianz.

While results are mixed, willingness to turn down unprofitable business was a theme. Several companies’ GWPs have reduced as business was rejected.