Brown said he was “absolutely delighted” with RSA’s 11% growth in premiums to £2.9bn, and added that RSA’s group result – an overall COR of 96.4% – demonstrated the insurer’s “ability to ride a cycle out”.

The insurer attributed its underwriting performance to last year’s extreme weather, with £110m of additional losses coming from the cold snap in November and December.

RSA admitted that 2010 was also a “challenging” year for motor. It has strengthened prior year reserves by £22-£25m, of which relates to commercial motor. Brown attributed this to the rise in bodily injury claims, but said that, compared to peers, RSA was on top of the problem.

Asked if there would be any further rate releases, he said: “I believe we’re right on top of bodily injury, and we will continue to monitor it really, really closely.” 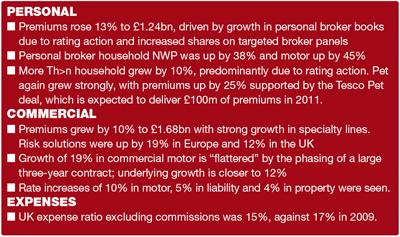 He forecast continued double-digit rate increases in motor. Brown predicted the number of claimants per bodily injury claim would level out this year, but that underlying severity and frequency would continue to rise.

He said: “It would be madness if we didn’t get double-digit rate rises right through 2011. But I’ve been in this business long enough not to be amazed by anything.”

Brown defended the insurer’s performance on household, saying that over the past 10 years it had got its pricing right. However, he said this was not the case across the market.

“The market is underpriced by 3%, 4%, 5% and maybe this sort of event [the winter weather] will cause rates to rise closer to double digits rather than low single digits.”

He said he expected RSA’s household rate rises to “nudge up” from the 2010 level of 5%.

Brown was critical of rivals that offered to undercut the market on price, or boost broker commissions. He said: “I’m all for innovation, creativity, service – things which differentiate companies. Extra commission or X% off price is just a lazy way to grow a business.”