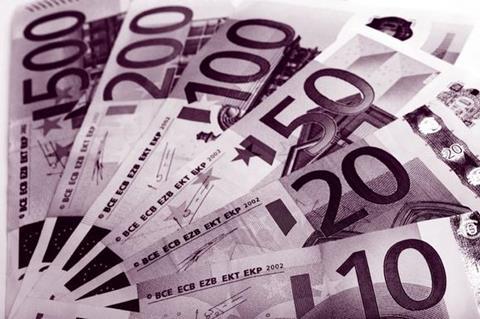 Click on the image link on the right to see the full financials compared for all six insurers.

Groupama is the most vulnerable insurer to events in the eurozone out of the six conglomerates. In September, Standard & Poor’s downgraded its financial strength from BBB+ to BBB after it failed to convince the rating agency it had taken sufficient action to improve its capital adequacy.

As well as being exposed to Greek and Portuguese debt, Groupama’s shares in French bank Société Générale have plummeted. Last month, longstanding chief executive Jean Azema was replaced with new management following the problems in the eurozone.

Groupama is currently mulling selling off parts of its business, such as the GAN insurance unit. Its solvency ratio is 130%, the lowest of the six composites. More worryingly, peripheral debt is 316.7% of shareholders’ equity.

On the surface, it would appear Ageas has much to fear from the crisis. The company was born of Belgian/Dutch bancassurance group Fortis, which was bailed out and broken up after the financial crisis hit in 2008. The company’s stock price has also been volatile recently amid the bad news over the eurozone.

But it seems that the rebranded insurance group has left nothing to chance. While it has a relatively small capital base, and has a strong dependency on eurozone sovereign debt, as evidenced by its 65.6% exposure relative to shareholders’ equity, it has the strongest solvency margin, despite taking heavy hits during the year.

Ageas suffered a negative impact of €615m (£532m) related to the financial crisis in the first nine months of 2011, pushing it into a loss of €534m. Some €503m of the negative impact was caused by impairment in its Greek sovereign portfolio.
But as Ageas has already taken a large hit on its Greek portfolio, the worst may be over for that particular exposure.

Europe’s largest insurer has a peripheral eurozone sovereign debt exposure to match. Its total exposure of £28bn is far higher than any of the other insurers here.

It is not the most exposed in relative terms, given the size of its capital base, and its exposures are comfortably below its shareholders’ equity levels. But its heavy eurozone dependence is enough to have some analysts concerned. Its exposure to Italy alone is €25.6bn. “If spread-widening becomes real impairment, Allianz has a very serious problem,” Collins Stewart analyst Ben Cohen says.

Stress tests performed by stockbroking firm Jefferies, which assume that equities will fall 25%, bond yields will fall another 50 basis points, credit spreads will widen by 200 basis points and the valuation of several sovereign debt instruments will be written down, would put Allianz’s solvency ratio below 100%. Offsetting this is the fact that it is the highest-rated insurer of the bunch, showing that rating analysts are comfortable that, despite the exposures, Allianz will continue to pay claims comfortably.

Aviva’s share price has fallen 40% in the last six months as fleeing investors view it as the most exposed UK-based insurer to the eurozone. But Aviva has strengthened its capital position by selling off RAC for £1bn and part of its stake in Delta Lloyd for £381m. Aviva easily has enough surplus capital to inject into its business if it has to take losses on its bond holdings when marked down on current prices.

But only a major default by Italy, to which Aviva has a £7.1bn exposure, would cause considerable problems. Aviva would share the losses with life policyholders. A more immediate threat to profits is the loss of life and protection business in peripheral countries owing to a probable economic slowdown.

French insurer AXA also has comparatively little to worry about at this stage. Its peripheral eurozone sovereign debt exposure as a percentage of shareholders’ equity is the lowest of the group. Its solvency margin is also in a fair position, at 150%. Some analysts have put it even higher: Jefferies’ Jonathan Urwin believes it may have risen to 170% since the third-quarter figure was published.

But, according to JP Morgan, the company has the highest peripheral eurozone bank debt exposure of its peers, at €6.7bn. By comparison, Allianz only has €3.9bn, Zurich $2.5bn (£1.6bn) and Aviva £1.2bn.

Nonetheless, it is highly rated by Standard & Poor’s, and Jefferies’ stress tests would leave its solvency ratio at a still respectable 120%.

Only a deterioration in French government bonds, of which AXA holds €43bn, would significantly impact the insurer’s financial strength.

Zurich’s peripheral eurozone debt exposure is not to be sniffed at, coming in at £7.4bn. But this exposure is one of the smallest of its peer group in both absolute and relative terms.

Coupled with this, the company’s S&P financial strength rating is among the highest. Rating agency AM Best gave Zurich’s main Swiss insurance operating division a clean bill of health on 18 November, praising its “excellent risk-adjusted capitalisation”.

Zurich benefits from a well-diversified investment portfolio and it is not as heavily dependent on the eurozone as some of its peers. Its North American operations, for example, accounted for 35% of total non-life gross written premium for the first nine months of 2011, and 20% of its government bond portfolio is made up of US paper.

The company also has a very strong solvency margin - one of the highest of its peer group, measured according to the Swiss Solvency Test.

We look at how Europe depending on how well the crisis is handled ‘Eurozone crisis: What’s the worst that can happen?’