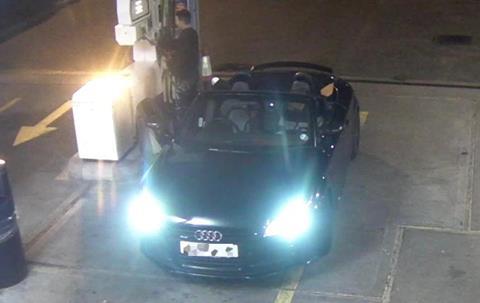 A man from Sheerness in Kent has been given a 14-month jail sentence after falsely claiming that a hire car he crashed had been stolen.

Scott Kenten was convicted with the help of data from an In-Car Cleverness (ICC) telematics device and CCTV footage of him refuelling the car after the supposed theft (pictured).

He was sentenced to 10 months for dangerous driving and four months for perverting the course of justice at Maidstone Crown Court on Friday. The sentences will run consecutively.

Kenten hired the Audi TT after his own car was damaged in another accident where he was not at fault.

He then crashed the Audi in the early hours of 9 October 2014. The ICC telematics device showed that he had been travelling at 100 miles an hour before crashing into parked vehicles at 66 miles per hour.

Kenten claimed the Audi had been stolen, but he was caught on CCTV refuelling it.

Anti motor fraud specialist APU provided the data from the ICC device and collected further evidence that Kenten was at the scene, including the CCTV footage.

APU director of investigative services Neil Thomas said: “Not only were we able to prove that Mr Kenten’s claim that the car was stolen was fraudulent, but we were also able to reconstruct events and prove exactly what happened and when. Unfortunately for him, he was also caught on CCTV refuelling the vehicle after the supposed theft.

“Whenever we can help the police and insurers to reduce dishonest claims, we’ll do all we can – ultimately it benefits law-abiding motorists.”