Non-life insurers may have seen off the worst of the financial crisis, but they can’t use their reserves to conceal dwindling margins for much longer

The last year has seen the underlying underwriting performance in the UK non-life insurance industry come under increasing pressure from margin erosion. In analysing the performance of UK non-life risks written by insurers, rating agency Standard & Poor’s believes that this margin erosion has largely been masked by reserve releases, although its analysis of the motor, property, and liability classes shows varying impacts from reserve movements.

Meanwhile, investment returns have been limited by low interest rates and insurers’ conservative investment strategies during the financial turmoil of the last three years. It is no surprise, therefore, that evidence of real price increases has emerged over the past year or so, especially in motor insurance.

These price rises should lead to an improving underlying underwriting performance, but the extent and longevity of this improvement is not yet clear. S&P believes the actions of industry leaders, particularly actions that support strategic risk management, will determine how the cycle develops in each class of business.

As the UK economy emerges slowly from recession, S&P considers the health of the UK non-life insurance industry to have been only slightly impaired. When the technology bubble burst a decade ago, it caused significant damage to insurers’ balance sheets. This time, the industry was much better prepared. In general, it has exhibited a low exposure to high-risk assets, such as equities, and a high exposure to high-quality and well-diversified bond and cash holdings. Many insurers have also protected their balance sheets by using equity hedging strategies. Overall, this has meant that industry capital has not been significantly depleted by net investment losses. Furthermore, as capital markets, and particularly equity markets, recover their poise, S&P expects the industry to increase its investment risk profile, albeit only slightly.

Similarly, the weak economy has brought, and continues to pose, relatively limited challenges to the UK non-life insurance industry. Lower economic activity usually results in lower demand for insurance, a greater focus on price, a greater propensity to claim by the insured, and increased fraud. The industry has reacted to these threats by cutting costs (especially staff), improving operational efficiencies in other areas, and increasing fraud detection capabilities.

While S&P believes that demand for insurance shrank in 2009, key economic indicators point to a gradual improvement in 2010 and 2011: it forecasts that the economy will grow, albeit slowly, in both years. S&P also believes that the unemployment rate has peaked and that it should start declining next year. In addition, it forecasts that general inflation will remain low and relatively stable – a positive factor. That said, very low interest rates remain a problem because of their effect on investment income.

Overall, aside from insurers that are largely involved in lines of business that are directly linked to economic trends, such as trade credit or payment protection insurance, the economic impact has been relatively muted. 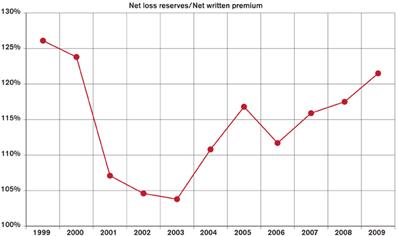 The risk of hiding behind reserves

On the face of it, we need not be too concerned about the underwriting performance of the UK non-life insurance industry. Data from the FSA shows that the industry has recorded an underwriting profit in five of the past seven years, 2007 and 2008 being the exceptions, and an aggregate profit of £3.7bn during this time. Moreover, the reported net combined ratio, a relative measure of the underwriting result, has been stable throughout this time – a rare feat – and has not exceeded 101% since 2001.

But the UK non-life insurance industry has achieved this over a period when price competition has been increasingly fierce and claims cost inflation has generally been rising, often quite fast. All else being equal, this combination would cause the industry’s profit margin to decline, possibly rapidly. The primary reason why S&P believes that the reported net combined ratio has not to date experienced margin contraction is that there have been huge releases of reserves for prior years’ claims.

The reported underwriting performance of the UK non-life insurance industry has been significantly helped over each of the past five years in this manner. By comparing the reported net combined ratio with the net combined ratio excluding prior years’ claims reserve movements (or the accident-year net combined ratio), we can see these net reserve releases have improved the reported ratio by between 5 and 8.9 percentage points every year. In some classes of business, such as motor, the discrepancy has been much more marked. In addition, analysis shows that net reserve releases have been between 4 and 7 percentage points of the prior year’s net loss reserves in each of the past five years.

Given the size and persistency of these net reserve releases, S&P questions their continued level and durability. Were the reserve redundancies to be exhausted, the reported net combined ratio would likely be the same as (or even higher than) the accident-year ratio, and the illusion of stable, profitable underwriting could vanish.

It is difficult to determine the impact of reserve movements on the industry’s future underwriting performance. The ratio of net loss reserves to net written premium, a standard if basic reserve analysis tool, has seen a steady increase in the past three years to a level not seen since 2000. S&P uses premiums in its analysis as an approximation for exposure, and notes that trends in the ratio can be distorted by a material change in reserving accuracy or policy. Similarly, it is important to distinguish between premium growth that is purely volume-driven and premium growth that reflects an increase in the price of the risks underwritten, as this can lead to misinterpretation of the ratio.

All else being equal, the increase in the ratio suggests that there has been deterioration in the quality of the underwriting. But it does not tell us whether the net loss reserves have become more or less prudent: if less, then expect lower reserve releases over time, and vice versa.

S&P believes it is likely that the ongoing erosion of the underlying profit margin is hampering insurer efforts to maintain prudent reserve margins. As a result, it expects much lower reserve releases in 2010 and 2011, or possibly even increases in reserves. 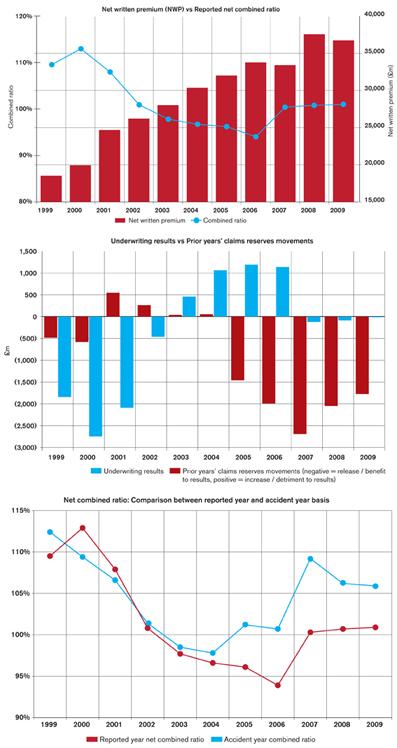 With support from prior years’ reserve releases likely to diminish further, we expect the industry’s reported net combined ratio or underwriting ratio to weaken unless price rises above the cost of claims inflation are implemented. There is some evidence that this is happening, especially in personal motor insurance, where the need seems most pressing. Nevertheless, there is also anecdotal evidence that price competition remains fierce in a number of lines, such as commercial property. Consequently, while S&P believes that the bottom of the pricing/underwriting cycle has passed, it cannot yet predict with confidence the speed and strength of the upswing. It is, therefore, cautiously optimistic about the industry’s ability to improve its underlying or accident-year underwriting performance this year, but less certain of improvement in the reported performance. IT

Motor insurance is the class of business that has probably attracted the most analysis, given its large size and highly competitive environment. Having been a typically cyclical business, it had nevertheless apparently beaten the cycle in recent years with an underwriting result and reported net combined ratio that appeared to be steady, if unspectacular, from 2001 to 2008.

This, however, was an illusion: the underlying data revealed that, as accident-year performances worsened, the results were supported by increasingly large prior years’ reserve releases. The illusion was finally shattered in 2009, when reserve releases seemed to effectively dry up at a time when claims frequency and severity, especially for bodily injury, had deteriorated.

We observed that, in aggregate, personal motor insurers actually increased their prior-year reserves in 2009. As a result, the reported net combined ratio for motor in 2009 was 120%, almost 18 percentage points worse than that reported for 2007.