Zurich blamed problems in its own business, rather than anything untoward it found in RSA’s, for its withdrawal from the deal. But Hester was expected to use the deal as his exit route from RSA. Now that plan has fallen through, will he try to leave anyway, or continue the extensive turnaround work he has begun at the troubled insurance group?

New RSA UK and western Europe chief executive Steve Lewis, previously UK general insurance head at Zurich, has wasted no time in making his mark as he has tackled the UK division’s lacklustre performance in some lines. His boldest stroke so far has been the withdrawal from brokered personal lines motor in the UK, which the company announced in August.

Despite the Zurich deal collapse, Hester still seems keen to do a deal. In a newspaper interview he said he had identified eight potential buyers for RSA.

Until that happens, the company will continue on its turnaround. The bulk of the recent work has involved selling non-core units overseas.

Most recently, the insurer sold its Latin American operations for £403m to Grupo de Inversiones Suramericana, and news reports have suggested the next divisions to go will be Russia and the Middle East. 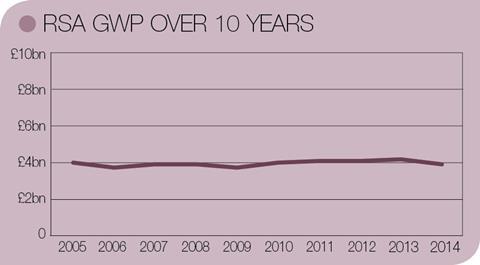