Why would a consolidator want a broker network?

As rumours grow about the possible sale of the Broker Network to a consolidator, Danny Walkinshaw assesses the potential value of such an acquisition

As consolidation continues apace, a recent approach for Broker Network has raised the question of whether a network would be a good acquisition target.

The reported interest in the network from Towergate and AXA has provided a varied response from the market, as some are unsure of the sustainability a network would offer a consolidator such as Towergate.

But there are also those who see networks dominating the future market and providing the only manageable growth option for small independent regional brokers – therefore increasing distribution channels for any potential buyer.

Towergate’s £276m acquisition of Open International, which included the Countrywide Network, raised eyebrows about its strategy. But Towergate chief executive Andy Homer said the group would not rule out buying another network in the future to add to its ever-growing empire.

AXA has also been credited with an interest in Broker Network, and the potential to offer schemes to the networks members, who currently control over £450m in gross written premiums, is where they would see the value in such a deal. Stuart Reid, co-chief executive of AXA’s broking division, recently stated: “Networks are a good feeding ground for us all.”

There is currently a scattering of broker networks around the country which are all competing for members. All are offering similar benefits to potential brokers that might be looking to increase their productivity.

All networks look to achieve the same objective of gaining new members and offering the best access to markets. But they often differ in their structure and who they are targeting.

It is the potential distribution model that the larger networks possess that is thought to have sparked interest from buyers.

Broker Network chief executive Grant Ellis was quick to play down the idea that the potential value of networks in the market is making them increasing acquisition targets.

Ellis also said that suitable buyers would have to show that they understood the concept of the business for it to work, and that consolidators were not the only suitable home for networks.

He added: “You have a range of different potential suitors, from insurers to consolidators, and even banks, private equity groups and international brokers.

“If anyone is interested in [broker networks] they have to be able to show that they are interested in them as a business. But if they break up the course of that business, the customers will know they can walk.”

A market-wide view suggests that the biggest networks will add value only to the larger consolidators, such as Towergate and AXA. It is felt that to make full use of them as a product they will need to have the facilities in place to increase profits through the vast amount of business derived from their distribution channels . 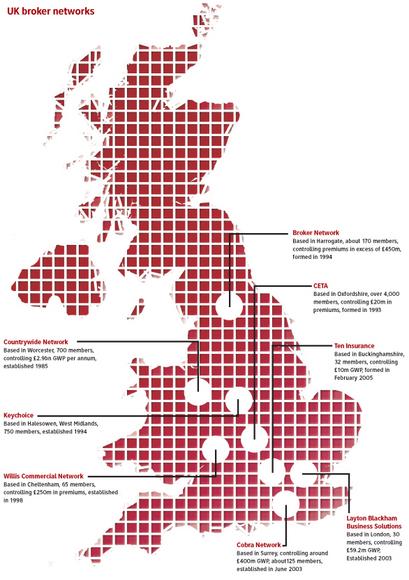 A question has also been raised over the potential valuation of a network, such as the Broker Network. Members, who often choose to join networks to remain independent, could become “nervous” if a large consolidator like Towergate were given control (see box).

Smart & Cook managing director Paul Meehan said: “In terms of acquiring networks I don’t actually see a great deal of value in it. “You would be buying only the income that the network members provide to the network, and that is quite fragile. All the members could disappear and then the income disappears.”

The future of networks has caused a split in the broking community because increasing consolidation is showing no sign of slowing up.

Grant Ellis and Andy Homer have predicted that there will be room for only two or three networks further down the line, but others think that there is scope for networks to continue growing.

He said: “There is always a place for networks. Brokers like to go a bit higher and some like to retain their independence. But the way things are going there are not going to be any brokers left. I can see the day when consolidators will own software systems, networks and brokers.”

The issue of networks consolidating with other networks has also been raised. Cobra Network chief executive Steve Burrows thinks it could be a real possibility.

He said: “I would not rule out buying another network because I would know how to get maximum profitability out of it.”

The growing reputation of broker networks is expected to lead to further consolidation. But until it happens, the market will remain unsure as to whether it is the way forward.

John Kitson, intermediary business director at Norwich Union, said that networks are the “new must have fashion accessory”.

But questions still remain on what could be an expensive gamble. IT

Valuing a network is not easy and could provide a potential stumbling block for suitors of Broker Network.
The complexity begins with the question of what is actually being bought. Is it the business with a brokerage of Â£25m or the vast, 167-member network contracting over Â£550m of premium?
The distribution potential of the network is a key consideration and must be factored into a valuation.
But there is there is also the question of how many of members would leave if it were taken over.
The Broker Networksâ€™ price/earnings ratio â€“ the measure investors use to gauge the potential of a company â€“ currently stands in between 25 and 30, a figure some suggest is disproportionately high.
Meanwhile the companyâ€™s market capitalisation ranges between Â£70m and Â£80m.
Analysts, however, suggested that the company would fetch a price of up to Â£120m.