Willis lags behind among big three with £105m profit drop

Operating income from these two groups’ insurance and reinsurance broking business alone, excluding their respective human resources and employee benefits consulting arms (which play a far smaller part in Willis’s results), grew by 19% at Aon and 10% at MMC.

Willis’s drop in profit was caused by one-off restructuring and refinancing costs, which should improve results for future quarters.

The broker paid out £97m for its operational restructure and $171m in redemptions to holders of its previous bond issue to reimburse them for lost interest payments. Willis replaced its previous issue with a new $800m bond issue and so had to buy back or redeem the old bonds early. 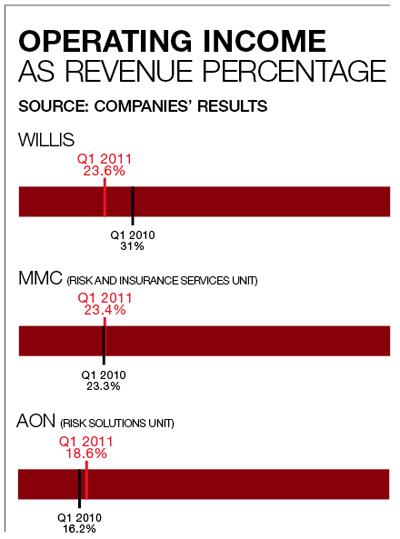 Willis was not alone in paying restructuring charges in Q1 2011. Aon’s charges came in at $30m, compared with $76m in the same period of 2010. A $23m portion of Aon’s charges were attributed to last year’s merger with employee benefits consultancy Hewitt Associates and $7m to the restructuring of reinsurance broking division Aon Benfield. Both were down to workforce reductions.

However, while it may be bottom of the heap for profitability, Willis topped the chart for organic revenue growth. Willis’s revenues were largely unaffected by acquisitions.

While all of the big three brokers made a profit in the first quarter – leaving aside Willis’s decline in profitability – they continue to face challenging conditions.

Organic growth margins are thin across the board, with 4% at both Willis and MMC and only 2% at Aon.

Only MMC bucked the trend on investments, bringing in $19m in Q1 2011, compared with $8m in Q1 2010. But in all cases, investment income is a tiny portion of overall revenues.

Brokers are being squeezed from all sides as clients buy less insurance, competition cuts into fees and soft rates erode commissions. As such, it is natural to embark on cost-cutting measures. With organic growth scarce and a number of smaller players also hurting, it seems likely that the big three will make further acquisitions.

Aon and MMC now take a growing amount of revenue from human resources and employee benefits consulting: MMC’s consulting revenue was 44% of the total for Q1 2011 and Aon’s was 41%. Willis offers such consulting, but it only accounts for roughly 10% of fees and commissions. Given its focus on cost-cutting, it seems unlikely that Willis will bolster its offering with an acquisition in the near future.