Admiral profits up but jury out on bodily injury claims 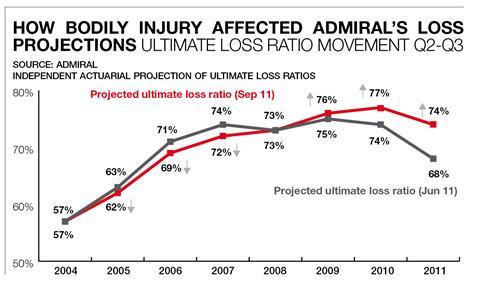 Admiral’s pre-tax profits beat market expectations for 2011 by growing 13%, but question marks remain over its exposure to bodily injury claims.

Such was the impact of the results on the market that after they were announced on Wednesday, Admiral’s share price climbed 12% to £11.61 in morning trading.

The anticipated combined ratio for 2011 is in the late
eighties, a pretty attractive outcome’

Shore Capital analyst Eamonn Flanagan said Admiral’s results were broadly in line with the guidance it had given in November. He said there was a “risk of further deterioration of its bodily injury experience”.

KBW analyst Greg Paterson said: “We believe there are three key questions to consider in order for us to retain our outperformance recommendation on Admiral: first, whether management have ‘kitchen sinked’ the bad 2010-11 cohorts of business in terms of higher reserves; secondly, whether pricing was changed sufficiently to get rid of these bad cohorts for 2012; and thirdly, whether Admiral can still grow vehicle numbers with these pricing changes implemented.”

Other analysts were bullish on bodily injury. Credit Suisse said in a research note: “We felt the message on claims development was a relief, with older claims showing signs of stability and an apparent decline in frequency in the fourth quarter.”

Until last year Admiral seemed to have been largely immune to bodily injury claims. In the 2010 first-half statement, it said it saw no “unusual trends in bodily injury or damage claims”.

But in November last year the company put out a profits warning and said it would miss City estimates due to higher-than-expected bodily injury claims, which had eaten into its reserve releases.

Since then Admiral has embarked on a four-point plan to improve its claims performance.

The insurer has carried out a detailed claims review, including additional independent actuarial analysis and independent expert reviews of higher value claims files; put in above-average rate increases, which slowed in the second half of last year; taken pricing action to shift its book away from high bodily injury claims frequency; and accelerated initiatives to improve risk selection.

Chief operating officer David Stevens said: “Disappointment should perhaps be set in context. The currently anticipated combined ratio for 2011 is in the late eighties, a pretty attractive outcome both absolutely and relative to the combined ratio of the market as a whole.”

Where has Admiral come from to where it is today?
Admiral was set up by American entrepreneur Henry Engelhardt in 1991. Officially launched two years later in Cardiff with a £1m development grant, the FTSE 100 company has grown to a staff base of more than 4,700 operating in nine countries. With 2.75 million customers and a 10% share of the UK private car insurance market, it has built its business on high profits, fast growth, low risk and good shareholder returns.

Why has the insurer become such a talking point in recent times?
Questions have been raised over how Admiral has achieved its success and its sustainability. While its competitors have suffered from a high volume of bodily injury claims and a tough economy, Admiral has continued to defy the odds, but recently those concerns have been heightened due to claims from prior years biting into its reserve releases.

What is the outlook for the company?
Admiral seems to have bounced back, beating its own profit growth estimates for 2011. The outlook for 2012 remains uncertain with much depending on how bodily injury claims from prior years develop. Admiral says large claims are the problem, but it is claims below £10,000 that have hit its rivals hardest. Either Admiral has its smaller claims well under control or there could be more problems to come.