The broker posted earnings, before interest, depreciation, tax and amortisation (EBITDA) of $68m (£42m), and fees and commission of $340m last year.

Privately, analysts believe a broker should have at least $60m EBITDA for a flotation to avoid a liquidity problem on the stock market. A number of brokers have listed during the last 10 years, but since the financial crisis their share prices have flatlined. 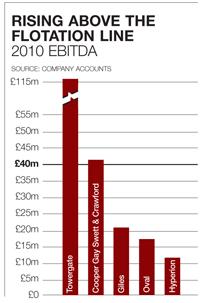 Chief executive Toby Esser said flotation could take place anytime between this year and 2014, adding: “We were never large enough previously but now we are, and we’re keen to grow and build on what we’ve got.”

Esser said morale in the Swett & Crawford side of the group was good following the merger, and has been hitting budgets and targets.

We say ... only the strong survive

- In the giddy noughties, a number of brokers floated, but found the stock market can be a difficult place. THB, Cobra and Brightside saw their share prices crash after the financial crisis and then flatline, as investors and analysts shy away from small cap stocks without significant growth opportunities.

- JLT, the pin-up boy for wannabe broker floaters, answered all those questions, and its share price has rocketed from just below 200p to 700p since flotation in 1999.