Taxpayer-subsidised NIG has been accused of recklessly undercutting its rivals with a controversial guarantee to beat the prices of 15 rival insurers. Critics warn that such tactics not only hurt insurers’ bottom line, but prolong a soft market for all

Once again, NIG is in the firing line. Last year, brokers were left fuming after the insurer suddenly axed its personal lines business. Now it’s the turn of NIG’s rivals to vent their anger, accusing it of recklessly undercutting the market.

The row centres on NIG’s guarantee to beat the prices of 15 competitors on standard package products. NIG has vigorously defended its right to compete, stressing that it is fighting fair and that, ultimately, the customers benefit.

Rivals aren’t listening. They accuse NIG of suppressing rates when the market is already very soft. Adding salt to the wound is the fact that NIG’s parent is The Royal Bank of Scotland Group, which is being kept afloat by the taxpayer after being bailed out during the financial crisis.

The NIG offer has blown open the wider debate on other insurers offering similar deals, such as those promoted by Towergate Underwriting, AXA and Aviva (see box). Critics point out that, as well as perpetuating the soft market, these insurers could end up badly damaging their own underwriting performance. 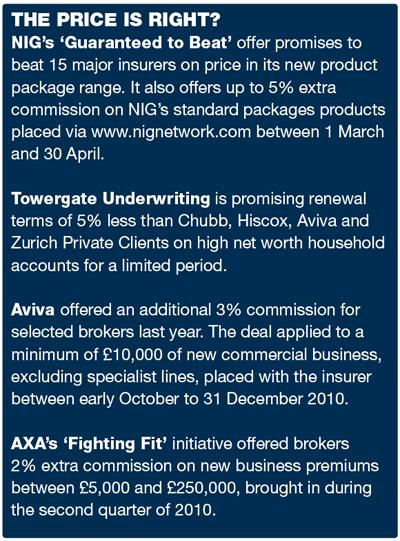 The deals themselves are typically one of three types: guaranteed to beat any premium price, price matching and commission incentives.

RSA chief executive Adrian Brown labels this strategy as a “lazy” volume grab: “I find it disappointing. I’m all for innovation, creativity, service – things that differentiate companies – but extra commission or X% off the price is just a lazy way to grow a business.”

The cut-price deals come at a time when the market is in poor shape. Claims in liability are rising, investment returns are still low and reserves have largely dried up. Rate rises are desperately needed, but there is a feeling that the soft market is going to rumble on, thanks in part to players on a kamikaze mission for market share.

Hiscox underwriting director Gary Head says: “It appears that the market is falling into that old trap of underpricing business, and that only ends up in one place. As a community, insurers and brokers need to present the reality that prices are unsustainable. We need to ensure that premiums are priced right, and messages like ‘we will beat any price’ don’t help that.”

Head is particularly critical of the NIG offer, as it is indirectly bankrolled by taxpayers’ money. “I think with the challenge the country has with the deficit where it is, you would expect taxpayers’ money to be spent wisely and prudently.”

“Undercutting a market that has been softening for some time, where investment returns are low and claims are high, seems very short-sighted,” he adds. “It puts further pressure on the taxpayer to fund the ultimate losses that are going to come through from that.”

In response to such criticism, Royal Bank of Scotland Insurance chief executive Paul Geddes argues that the NIG deal is a storm in a teacup. He says it is on such a tiny fraction of NIG’s book that it will hardly rock the market.

“It really doesn’t go near to being anywhere material in the overall scale of our business: it’s adding a tiny fraction of a per cent,” he says. “We’re very, very comfortable with it, and it shows that we are open for business – brokers like it and customers like it. We think this is a profitable thing to do.

“So it’s a story that has got a bit out of proportion to its scale, as a promotion in one channel, one product, in one part of our business.”

“If we were to offer these deals on every single risk, I would agree [with the criticisms],” he explains. “We are not, though. We are very selective in terms of any promotion and, where we do offer promotions, it’s where we believe the market is pricing the risk above what it may be worth. That allows us discretion to secure it as a piece of new business, while still delivering undewriting profits.”

One single insurer offering deals can’t keep prices down across the market. The trouble comes when others feel compelled to follow suit.

AXA group finance, risk and strategy director Jean Drouffe says: “We offered lower commission add-ons than our competitors, but we really felt that this was a market feature and we had to go with it. We did the minimum we thought we needed to do.”

Asked whether these deals keep the market soft, he says: “That’s why we do it to a much lesser extent than some of our competitors.

“In 2008/09, Aviva and AXA were number one and number two. We were very strong on that [not paying additional commissions]. It cost Igal Mayer his seat as chief executive and, when he left, Aviva did a U-turn and started ‘buying’ business like crazy at any cost, by offering discounts on premium and also offering commission deals.”

Aviva’s intermediary and partnerships director Janice Deakin defends the insurer’s quarterly incentive programmes, saying they were time-limited and targeted at specific areas where the insurer wanted to grow.

“The latest programme included an incentive to try to get all our deals in place early, because we think that works for us and the broker,” she says. “But every quarter we refresh our trading incentives. It’s about targeting good quality business. So while you could always challenge it and ask how it fits with profit ambitions, if you gear your incentives in the right way – towards quality business – then it actually helps profit. And I’ve just given NIG a big tip there!”

Aviva, AXA and NIG have one thing in common: they’re all thirsty for growth.

Both are listed companies, and the inevitable pressures from shareholders means that piling on volume can become the name of the game.

Meanwhile, NIG lost around £250m in revenue last year after putting its personal lines book into run-off. With a 2013 sale date looming on the horizon, the broker-only insurer has a limited time frame to grow.

But are these aggressive growth strategies sustainable? There are real concerns that insurers operating such deals could end up eroding their underwriting profitability.

Broker Network chairman Grant Ellis says: “They are banking on the market turning and, of course, if it doesn’t the business they’ve written is not likely to be that profitable – and could be very unprofitable.”

The deal-peddling insurers could have the last laugh, however. If the market does turn, they could end up with a greater market share and nicely profitable books.

But others fear a more worrying scenario for the rest of the industry: a soft market, fuelled by intense competition, refusing to harden despite obvious pressures. And one only has to look at the losses in private motor to know what can happen in that situation. IT