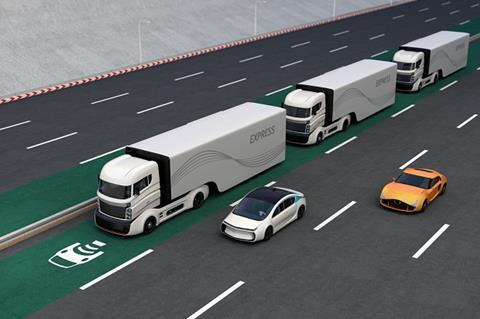 Responding to the UK government’s announcement this morning of an £8.1m trial of partially driverless lorries on UK roads, Williams said: “Our research suggests that introducing autonomous haulage could save industry nearly £34bn after 10 years, when considering cost savings across four cost categories: labour, fuel, insurance and vehicle utilisation.

“Automated freight will not only be much more efficient, reduce congestion on the motorways, and make the roads safer for other users, it will also reduce the prices of the end products that we all buy.”

The trials will involve a process called platooning, where up to three heavy goods vehicles are linked together, with the lead vehicle controlling acceleration and braking.

All lorries in the platoon have a driver ready to take control at any time.

The government said that if tests are successful, the technology could have “major benefits for motorists and businesses in the UK”.

Transport minister Paul Maynard said: “Advances such as lorry platooning could benefit businesses through cheaper fuel bills and other road users thanks to lower emissions and less congestion.”

“But first we must make sure the technology is safe and works well on our roads, and that’s why we are investing in these trials.”

He added that there were “significant implications” for safety, congestion, environment, business and the UK economy as a whole.