After years of being dismissed as ‘boring’ by graduates, the insurance industry is suddenly awash with job applications from them. What is fuelling this trend? 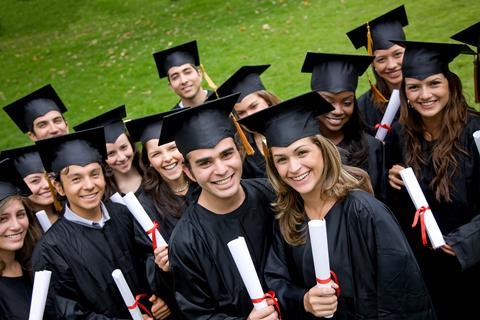 Right now, 8,845 graduates are fighting for a job at Allianz. Aviva’s graduate programme has seen 10 times the number of applicants for this year’s intake compared with 2011, while Marsh reported 2,700 applicants for just 15 graduate roles last year, up by 1,000 on 2010.

Yet for years brokers and insurers have fretted over low levels of graduate job applicants, an issue widely blamed on the industry’s “image problem”. Even the new president of the Chartered Insurance Institute (CII), Julian James, has said he will focus on “the next generation of talent” this year.

So what is happening? Has the sector finally thrown off its “boring” tag? Or is the present deluge of graduate applicants a side effect of the dearth of jobs in the wider market, raising the threat that the current intake may not stay in insurance once the economy picks up?

Tom Carrigan, UK director of technical capability at RSA says: “The number of graduate applicants is clearly going up.” Even more encouragingly, he says the quality of candidates has risen too. “We have recruited people with double first degrees from Oxford University.”

They also are increasingly informed about the industry: “It would now be exceptional if we interviewed a graduate who did not understand the sector.”

Take Jakub Chalupczak, 23, who graduated from University College London with a first in an economics and statistics degree. He joined RSA 18 months ago as a graduate power and engineering underwriter and says: “I find insurance really exciting because I enjoy analysing political and climate risks.”

When I was 16 I admit insurance didn’t sound like the most exciting industry, but then I did a temporary job in compliance at a broker and I realised that this industry is fast-paced and exciting.”

So what is attracting graduates like Chalupczak? The industry’s efforts to promote itself do appear to be playing a role. The CII has held 150 on-campus events since 2008 and most of the larger companies in the sector give talks on the sector in schools and universities. RSA, for example, targets both graduate career fairs and university organisations, such as the Oxford Actuarial Society.

Insurers and brokers are taking more innovative approaches to promotion too. For example, both the Lloyd’s market and BGL have started using Facebook to reach graduates. BGL launched its first social media campaign three months ago with the aim of recruiting seven graduates for marketing roles. The broker’s associate HR director Lucy Painter says: “We have sent direct emails via Facebook that contain a link to our online application process. The process screens applicants so we now have hundred good quality candidates to look at.”

She says: “We’re using Facebook because we know how much students and graduates communicate through the website and we want to say to them, our organisation is on your level.”

Painter says the industry’s profile has been boosted in recent years aside from recruitment campaigns, however. Popular advertising campaigns, such as BGL’s meerkat-fronted ads for its Comparethemarket site, have played a role: “I cannot tell you how many applicants mention Aleksandr Orlov in interviews!”

Painter believes insurance is getting more coverage in the mainstream media too. “Stories like Jack Straw’s gender directive and the rise in motor rates have led to more discussion of the industry and how it works in the media.”

The Aldermanbury Declaration, launched by the CII in 2011, could result in attracting more graduates – although is not specifically aimed at them but rather at boosting professionalism in the sector. However, while some 150 brokerages, 30 insurers and 15 loss adjusters have signed up to the initiative, an Insurance Times survey in February found that only 13% of brokers believe the declaration is having a positive effect in general. Painter says that while well-intentioned, “it’s difficult to say if the declaration has had an impact on graduate recruitment per se at this stage, especially as there is no obligation to adopt it”.

Indeed, the sector’s sudden popularity with graduates cannot be driven by positive factors alone. There is a wide awareness in insurance industry HR departments that the economic downturn is at least partly driving the trend. Allianz graduate manager Amanda Haig says: “The lack of jobs available for graduates in all sectors means there is panic among them, which means some are just applying for any job – they are not worried about what industry they work in.”

The tarnishing of the banking’s image is also a factor. JLT Specialty HR director Sarah Dunmore says: “Banking and other careers in the City are not considered as stable or glamorous as before.”

This ‘panic-applying’ raises serious concerns about whether the latest recruits are really committed to remaining in the industry or whether they have opted for it as a last resort. Despite the current influx of applicants, Dunmore says, “the industry has still not done enough to promote itself to higher-calibre people”.

In turn, this raises the spectre of a talent shortage. Carrigan says: “There is still a potential shortage of skills – and particularly technical knowledge – looming.”

As depressing as this may be, now that the industry is attracting the right people, there is hope – if it can work out how to retain them. So how best to keep the best people on board?

HR experts agree personal development makes staff feel both more valued and committed. RSA is among many putting this into action with a relatively long graduate programme of two years, while Allianz even offers three years for some graduates. This is followed by mentoring and a focus on ongoing career development. RSA fully funds employees in their training to attain professional qualifications. Carrigan says: “We don’t just bring people in and expect them to do a job.”

At BGL, besides career development, quirkier perks are designed to keep employees loyal. Among them, a Wellbeing programme offers remedial massage and an internal lottery gives staff the chance to win prizes ranging from a week’s annual leave to £3,000. JLT, meanwhile, offers the opportunity of a secondment in one of its foreign branches, with its five Australian offices proving popular.

But with the average bank capable of matching this, such strategies are far from bullet-proof. One factor in the insurance industry’s favour is that while its average graduate entry level salaries are lower than those of most other financial institutions, for more experienced staff, insurance becomes significantly more competitive.

Perhaps the best chance the industry has of retaining high calibre recruits, though, is the work itself. Caspar Bartington, manager of Discover Risk, the CII’s student outreach programme, says: “This is a great opportunity for the sector to prove what a good place to work it is.” This means, then, ensuring the new graduate intake is exposed to most exciting facets of the sector.

A convert to insurance

“I genuinely think insurance is one the most underrated industries,” says Edward Burr, 24. Having graduated in modern languages from Nottingham University, Burr is now on JLT’s graduate programme working as an account handler in construction wholesale, dealing mainly in South America.

He says: “When I was 16 I admit insurance didn’t sound like the most exciting industry, but then I did a temporary job in compliance at a broker and I realised that this industry is fast-paced and exciting.”

He chose JLT’s graduate scheme because it is not rotational: “You go straight into your job role, which I really liked because you feel you’re getting a head start.”

Burr says the role matched his skill set: “The industry is very business focused but also people-orientated: I use my languages every day.”