Home premiums rise in Q2 after Beast from the East

Insurers have seen a jump in home claims thanks to sub-zero temperatures from February and March earlier this year.

It may feel like the Beast from the East was years ago, with the current climate Britain is seeing, but it is still dictating a rise in claims, according to the AA.

But now, with the cold snap and freezing temperatures being followed by a run of scorching temperatures, the AA says insurers are worried about subsidence claims. This is where the unpredictable movement of the ground due to the changing temperatures can loosen building foundations and cause damage. 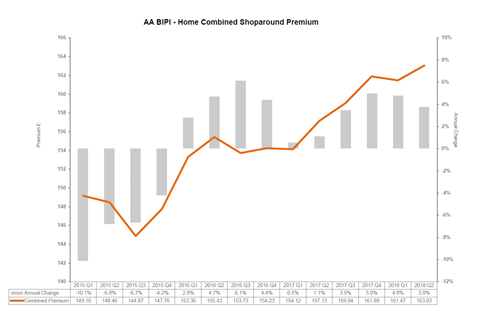 Janet Connor, the AA’s director of insurance says: “The harsh winter seems a lifetime away as we enjoy a long hot summer but insurers are counting the cost of claims related to the freezing conditions.

“Now there is some concern in the industry that if the hot weather continues to dry up not only our reservoirs. leading to hose-pipe bans, but the soil too – particularly clay that shrinks as it dries out and can lead to increased subsidence risk and consequent damage to buildings, in some parts of the UK.

“However, the industry is well prepared for such an eventuality. The last time there was a significant rise in subsidence claims was in 2006. Now might be a good time to check that your home is fully insured against such risk.”

Subsidence is the most damaging geo-hazard to property in the UK, costing around £3bn every decade.

The current Met Office measure of soil moisture deficit in the UK is ‘high amber,’ suggesting that if the hot summer continues there is an increased risk of a spike in subsidence claims, particularly where clay soil shrinks as it dries out.

Rainfall in the south east of England for June was the lowest it has been since 1925, at just 2.1mm of rain compared to the months average of 54mm.