JLT and MMC top organic growth league in first half 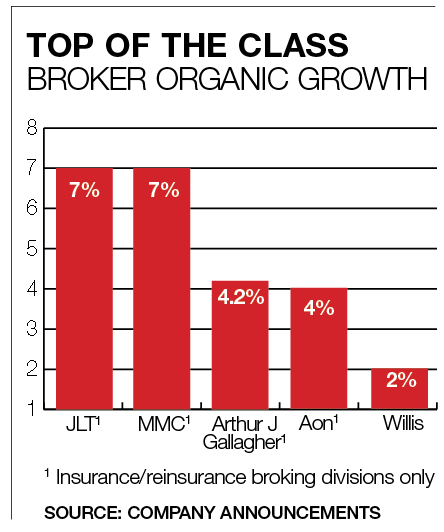 Jardine Lloyd Thompson (JLT) and Marsh & McLennan Companies (MMC) led the big five global brokers in organic growth in the first half of this year, with Willis continuing to trail the pack, according to Insurance Times analysis.

Willis, however, produced the biggest profit margin and reported the largest improvement in profit after its difficult 2011. Both JLT and MMC, which owns Marsh and Guy Carpenter, reported market-leading organic growth of 7% in the first half of 2012.

It is the second year in a row that JLT has led the pack on organic growth at the half-year stage, having notched up 7% in first-half 2011.

Arthur J Gallagher and Aon followed with organic growth of 4% and 4.2% respectively, while Willis lagged behind with 2%.

Willis said it would have achieved organic growth of 3% had it not been for losses at Loan Protector Insurance Services, the company’s US property insurance broker.

Yet Willis is clearly recovering from its difficult 2011, when it was hit by higher-than-expected restructuring costs, an FSA fine and a slowdown in business. The broker’s operating profit improved by 28.8% to £317.6m (H1 2012: £246.6m). This was the biggest improvement of the peer group.

Willis also reported the best first-half operating profit margin of the big five, at 26.9%. This was a major improvement on the 21.3% profit margin in last year’s first half.

At the other end of the scale, Gallagher reported the smallest profit margin of the group at 14.3%, in line with the 14.5% reported last year.

While its organic growth was 4.2%, overall fees and commissions grew by 22.6% as acquisitions continued apace. The next fastest overall grower was MMC with 8.7%.

Gallagher has made several acquisitions since the beginning of the year, most recently GS Chapman & Associates Insurance Brokers in California, in July, and Croydon-based broker Blenheim Park, on 7 August.