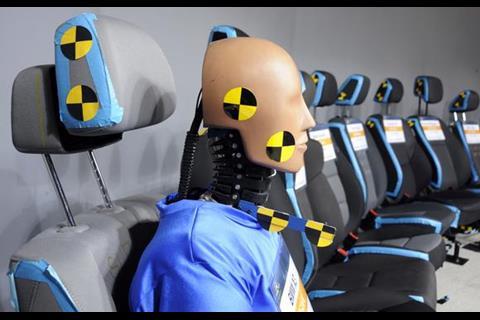 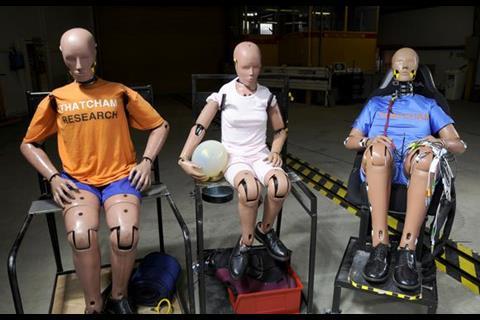 About 1,200 whiplash injuries are reported every day in Britain – an epidemic that costs the industry £2bn a year. Katie Puckett visits Thatcham to find out how a special crash test dummy is helping motor insurers spot the suspicious claims

Mr Average slumps in his car seat, sensors attached to his lobster-coloured skin and the vertebrae of his neck protruding from his shirt. His relations hunch nearby in their own seats, a slight female and a tall, heavyset male. They are the unlikely troops on the front line of the fight against fraudulent motor claims, the crash test dummies who face certain injury every day at the hands of the engineers at the Thatcham research centre in Berkshire.

Mr Average is a key figure in the battle, a “biofidelic rear impact dummy” adapted to determine whether low-impact collisions are likely to cause whiplash. His tormentor is Ed Giblen, Thatcham’s crash team leader, who will repeatedly shunt him backwards and forwards in different seats at different speeds.

“No dummy is like a human,” he says. “They’re engineered tools to test different things. But to all intents and purposes, he’s an average-sized male sitting in his seat, parked or in traffic, when someone goes into the back of him.”

Whiplash has become an epidemic in Britain, costing insurers nearly £2bn in 2007. The ABI says there are about 1,200 reported whiplash injuries a day, with low-speed collisions cited as a common cause. But as the number spirals, insurers know many of these must be fraudulent – their estimate is 40%. That means suspect claims could be costing the industry £800m a year, says Giblen.

Thatcham – or the Motor Insurance Repair Research Centre, to give it its full name – is an independent body but counts almost all motor insurers among its 35 members. They part-fund it through a percentage of their motor claims and meet regularly on both strategic and technical committees. With whiplash now accounting for three-quarters of motor personal injury claims, Thatcham has been developing “witkit” software to help insurers identify suspect claims and reduce the costs of treating genuine ones.

Motor insurers have invested £1m to buy something called a Hyper G sled – a computerised platform on rails fired by what Ian Lewis, the centre’s facilities manager, describes as “the most powerful airgun in the world”.

The data from the experiments will be fed into the software and used by claims handlers when a policyholder reports a crash. By inputting the details of the car and the accident, they can determine the likelihood of a whiplash injury.

If the risk is high, sufferers can be fast-tracked to rehab. If not, the claims handler knows to investigate further.

The project is in its infancy, but Giblen and his team have had demonstrable success with whiplash prevention. Thatcham’s first comparison of car seat safety was published in 2005: 60% of seats were found to be poor or marginal; only 16% were rated good. In the latest tests in 2008, three quarters of new seats were rated good or acceptable and only 16% poor. Since November, its research has been used across Europe to inform the Euro NCAP ratings for new cars.

Some manufacturers have embraced the ratings –Volvo, Saab and Audi have worked hard to improve their seat design and have secured a “good” rating for all their models. BMW, on the other hand, has refused to supply the seats for its 3-Series coupé and convertible, and Giblen says he has given up asking Porsche. “We embarrassed them by putting ‘refused supply’ for a few years, but we thought we’d done enough.”

A big part of Thatcham’s work is compiling technical information and repair methods on every new model that comes out; between 60 and 75 every year. It also trains apprentices, vehicle technicians and damage assessors – about 6,000 people a year – and in February 2007 launched a BSI Kitemark for vehicle repairs, now held by 238 workshops.

Last year, it began a “safe repair programme”, crash-testing three cars it had repaired to make sure they behaved in the same way as a new vehicle. This year, it will do the same to six.

On vehicle crime, with new cars difficult to steal without the keys, the onus is now on the policyholder. In 2009, Thatcham’s engineers will develop a set of questions to help claims handlers detect potentially spurious claims.“It’s things like, ‘Have you got both sets of car keys?’,” says Lesley Upham, the research centre’s commercial development director. “They might have left them in the car or left the car running, for example. We are saying if you ask these questions, you will see claims start to fall.”

Over in the crash laboratory, Giblen is testing bumpers – and discovering a surprising number fail their basic purpose of taking the impact of a crash and protecting the more expensive parts of a car. During Thatcham’s first bumper tests, published in 2007, he wrote off a Nissan Micra at just 6mph – revealing that under the bumper cover, there was no actual bumper. But the worst performer was the Subaru Impreza rally car, which sustained £4,151 worth of damage at the same speed.

On this day, to feed data into the witkit, Giblen has been bumping pairs of VW Golfs into each other at 10kmh to work out what the damage caused by common prangs should look like. He is simulating a front collision to the right-hand side where people pull out to overtake, or a back collision on the left because people are likely to steer to the kerb when they are about to be hit.

“Here’s another pair of our victims,” he says gleefully. The bumpers don’t look too bad but the impact has gone through to crush the expensive bits under the bonnet and, in the rear, to crunch the boot floor and the wheel well. “There’s a huge amount of material damage, lengthy and costly repairs. You’d have to replace the boot floor.”

Thatcham does not get handouts from manufacturers – it spends £300,000 a year buying cars, and the same again on leases. Giblen leased 12 of the Golfs and bought two, expecting to destroy only a couple, so it’s an expensive discovery. “They’ll go to salvage now – there’s 14 miles on the clock of this one and it’s a write-off.”

The research centre’s independence from the motor industry enables it to name and shame the models it finds lacking, but it also enjoys the clout provided by its membership of Euro NCAP. “It gives us a more powerful lobby,” says Lewis. “We can take the Euro NCAP banner and beat people over the head with it.”

Giblen’s favourite exhibit is the result of a Euro NCAP-sponsored test of the 2008 Nissan Navara, a giant black 4x4. The Navara was tested at 44mph against an 80,000-tonne concrete barrier. The bonnet has caved in and one of the enormous front wheels is under the passenger seat.

Worse still, the airbags deployed too late. It achieved the lowest safety rating since the Rover Metro in 1996, which was discontinued – one star out of five with a red line through it.

Nissan promptly modified all new production vehicles and launched a service campaign to upgrade the airbag software of all Navaras made since 2005.

And so Thatcham can claim another small victory in making roads safer and life more certain for insurers.

What the insurers say

“Thatcham doesn’t get involved in press games ... it engages with manufacturers. When they first did the whiplash seat testing, they gave manufacturers a year to get their house in order before they started publishing the results. The whiplash prevention has had a big impact in the past couple of years.”

“We’re pleased to have a body independent of the motor manufacturers to look at these things. The Thatcham times are useful for informing repairers how to do the work, for controlling costs and making sure they’re done properly. Even if insurers aren’t using them, they should be pleased they exist because it’s a third-party quality control. “All our repair companies now comply with the British standard for vehicle repairs. For the man in the street, life is better as a result of Thatcham.”

“One of the most important parts for us is the development of our engineers. Thatcham training makes sure we keep up with technology. It plays a large part in the world of the motor insurer.”