The firm revealed, for example, that its investigators found that a recent fire claim - costing £1m - was the result of faulty electric wiring due to internal alterations by two tenants who were growing cannabis in adjoining terraced houses. 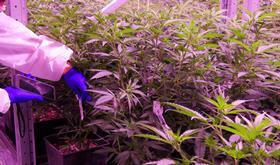 Woodgate and Clark’s head of counter fraud Marie Quinn said: “As lockdown measures have eased, we have seen a growing trend in fire and malicious damage claims across a number of insured property schemes which have arisen from the illegal cultivation of cannabis.”

Citing the aforementioned example, Quinn continued: “This was a catastrophic fire that badly damaged a block of three terraced properties, which thankfully were unoccupied at the time.

”The council issued a dangerous structure notice and insisted the roof be removed and fencing erected for public safety.”

Quinn explained that the tenancies in this example were arranged through a managing agent that outsourced the tenant references to a third party, which in turn failed to spot that the references were fake.

“We are warning our property clients to make doubly sure that tenants have the right credit and reference checks and that regular inspections are reinstated, especially now pandemic restrictions have eased.”

Landlords who have had cannabis grown in their properties reported the following types of damage:

Official statistics show that between 2015 and 2020, the number of cannabis farms detected in the UK increased by more than 150%, with criminals shifting away from large farms to smaller scale production.

As a result, 94% of cannabis farms are now located in domestic premises and around 25 farms or factories are being discovered by police per day.

In the past 12 months, cannabis farms have been found in some unlikely locations, including a large, partially occupied office complex, a pub basement, a light industrial unit situated next door to a police station and a large, unoccupied country mansion.

Empty city centre commercial properties have also provided a safe haven to criminals where more people have been working from home during the pandemic.

Quinn added: “Some policies give cover for malicious damage, but others include exclusions, such as damage arising from any criminal activity or malicious damage caused by tenants. It is therefore vital that clients carefully check policy wordings as well as carry out routine checks.”

Woodgate and Clark is advising landlords to:

For the cannabis cultivation process, the main electricity, gas and water supplies are hacked, which means the drug dealer does not pay for any of the utilities used. It is this process that creates the risk of fire.

In spotting a cannabis farm, landlords should look out for a strong, pungent smell, painted windows or curtains permanently closed, physical security outside and high levels of condensation.

They should also watch for lots of visitors or activity at the property - often at unsociable hours - levels of power usage and snow melting on a roof, which might suggest a strong heat presence, bright lights day and night and the constant buzz of ventilation.