Allianz Group’s losses from natural catastrophes in the first three months of 2018 amount to more than the combined losses incurred by the three next most badly hit insurers.

According to data gathered by S&P Global Market Intelligence, Allianz Group’s losses were more than the combined losses of Generali, Talanx AG and Chubb.

The Germany-based insurance group reported €311m in total losses from all natural catastrophes during the quarter, €220 million of which was incurred specifically due to Storm Friederike, which hit Germany, Belgium and the Netherlands in mid-January.

See S&Ps chart for losses below: 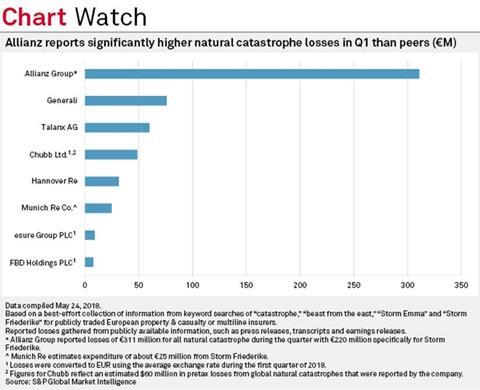