Analysis: The Knowledge – London flood, a disaster movie with a £6.3bn bill 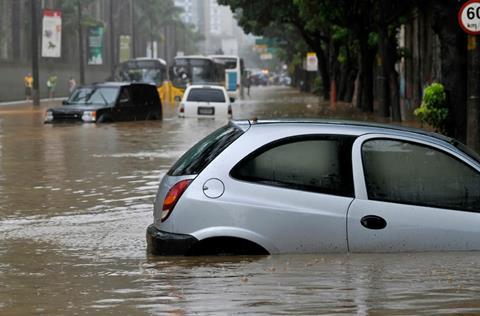 The economic impact of a flood in London is $9.71bn (£6.36bn) with a moderately high threat severity level, according to the Lloyd’s City Risk Index.

The rating – GDP@Risk in London – backs up an earlier Lloyd’s Realistic Disaster Scenario (RDS) for the River Thames based on heavy rainfall that results in extensive flooding of the Thames from Oxford to Teddington.

The flood scenario results in an industry property loss of £6.2bn and covers 194sqkm, causing significant impact on the populated areas of Oxford, Reading, Slough and Henley and areas of western London.

“Flooding in 2007 around Oxfordshire was not on that level, but caused a lot of damage,” says JBA Risk Management technical director Iain Willis.

“The key thing about it happening in London and the reason it’s so devastating is just the exposure. There is so much insured exposure and so any flood event there will be much more damaging in insurance terms than in a rural area.” 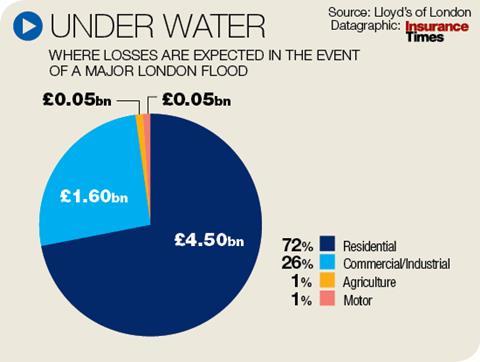 The capital is also at threat from storm surge, with the city’s flood defences expected to come under more pressure as a result of climate change and sea level rise.

In the 2007 movie Flood, a giant wave surges up the River Thames – past the London Eye and Houses of Parliament – breaching the river’s banks and inundating everything in its path. While the movie was a flop, it dramatises a real, albeit remote, disaster scenario.

The last time the Thames flooded the streets of London was in 1928. But it wasn’t until the 1953 North Sea flood that planning for the Thames Barrier began.

It was designed to be closed once every six years on average, and through the 1980s was closed just four times.

But barrier closures have increased dramatically since. During the height of the 2013/14 winter floods, the barrier was closed a record 20 times, bringing the total to 50 for that winter as a whole.

The Environment Agency (EA) says the barrier should not be closed more than 50 times a year, but is only of concern if that level occurs regularly.

The barrier was originally designed to last until 2030, but recent analysis suggests it could provide robust enough protection until 2060-70, even with expected sea level rises.

Between 2035 and 2049 both upriver and down-river defences will need to be raised according to the EA’s Thames Estuary 2100 plan.