The FCA, pressure on mid-market brokers, and the role of Biba were the hot topics at the second Broker 50 event of 2013 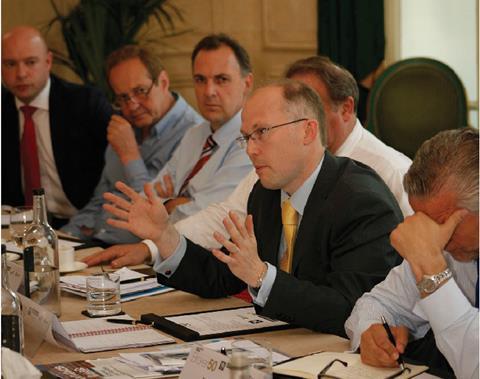 The Broker 50 Summer Rendez-vous, held on a warm, sunny day in the splendour of London’s Mandarin Oriental Hotel, was a turning point for the event.

For the first time, senior brokers and executives from sponsors ACE, Enterprise Rent-A-Car, RSA and Xchanging were joined by a delegation from Biba.

The role of Biba in strengthening the voice of brokers has been a recurring theme of the Broker 50 gatherings – so much so that it was made an agenda item at the previous gathering in April to include Biba in the discussions in future.

Responding to this call, Biba chief executive Steve White, who could not attend for personal reasons, was virtually present in the form of a video interview with Insurance Times executive editor Saxon East.

Biba executive director Graeme Trudgill attended the meeting in person to answer any further questions and concerns raised by the brokers present.

Also, shortly before the event, the FCA had started sending out questionnaires to brokers and other financial services firms selling directly to consumers about how they incentivised their sales staff.

It was hardly surprising, then, that regulation dominated discussions. Brokers in particular recognised that the conflicts of interest review was a significant one for the industry.

On the positive side, brokers now feel they have a much better grasp of what the FCA is trying to achieve through the various thematic reviews, and how it will approach regulation.

There is a sense that brokers are more comfortable with the FCA as a regulator. Chief executive Martin Wheatley’s “shoot first, ask questions later” comment, made before the FCA took over insurance broker regulation, now looks at odds with the thematic reviews. The regulator seems to be trying to glean as much information as possible through these reviews about the inner workings of the industry.

However, the sheer volume of thematic reviews is a concern among brokers. The two reviews announced shortly before the Broker 50 event followed the personal lines claims probe, which was unveiled at Biba’s annual conference in May.

Answering the FCA’s questions is costing brokers time and money. This is a big demand in such a tough market, where customers are more price-sensitive than ever and pressure on commissions is growing.

On top of this, as Biba has shown in its 2013 manifesto, the cost of insurance broker compliance as a proportion of revenue is by far the highest in Europe.

In addition to discussing regulation, brokers took the opportunity to ask Biba several questions. Brokers were interested in how Biba, often seen as a body for smaller brokers, could adequately represent brokers of all sizes.

Biba is looking to address this with its recently launched proposals on changing how it segments members – although there was some discussion about whether the £1m revenue threshold to separate small firms from large ones was high enough.

Brokers were also keen to get updates on how Biba was tackling the issue of the cost of compliance and the high levies insurance brokers have to pay into the Financial Services Compensation Scheme (FSCS). This despite the fact that they are not the main cause of the payment protection insurance mis-selling that is such a big strain on the FSCS’s resources.

While brokers had many demands and questions for Biba, there was recognition that brokers need to support Biba if they are to have a strong voice with regulators and the wider market.

For example, to fight the brokers’ corner on proportionate regulation, the trade body needs examples of where regulation has arguably been disproportionate.

It is tough work tackling the thorniest issues in UK general insurance broking, but thankfully the executives were able to unwind with a glass of wine in the sun while contemplating their next move.

“The more dialogue you have with informed decision-makers in the sector, the better. The Broker 50 is a fabulous vehicle to exchange views beyond tittle-tattle and discuss industry issues that need to be tackled here and now. What we were discussing with regard to the FCA, the pressure on mid-market brokers and the role of Biba are genuine current issues. Insurance Times is bringing together like-minded individuals with a sense of purpose and I applaud it on this journey.”

“When the Broker 50 group last met in April, the FCA had just begun and the attendees were all speculating as to what to expect from it. It is fair to say that, three months on, brokers can be in no doubt about the FCA’s key agenda items. Quite rightly, its focus is on ensuring that brokers deliver good and fair outcomes for their customers. The culture of a broking firm will be at the heart of this and brokers will need to consider the strength of their own moral compass.”

“The Insurance Times Broker 50 is an important gathering of the leaders of our sector. It was a great opportunity to get stuck into key Biba Broker Manifesto issues and to discuss our strategic review. There was a lot of goodwill towards Biba and it is invaluable to have top brokers giving us the latest feedback and insight so we can go into bat for them, whether it be on issues coming out of the market, Whitehall, Brussels or the strong tide of regulation coming out of Canary Wharf.”